WHAT IS POLLUTED AIR DOING TO US IN THE WESTERN BALKANS?

Poor air quality is one of the causes of mortality, shorter life expectancy and higher healthcare costs in the Western Balkans. Air pollution shortens our lives and takes them away from us; its consequences are making us go to the doctor’s more frequently to be treated for various respiratory diseases. Focused on this third topic, the “Balkans United for Clean Air” campaign calls upon Western Balkan countries’ citizens to join the struggle, to improve air quality together and help prolong all of our lives.

The Joint Research Centre of the European Union states that air pollution in the Western Balkans shortens life expectancy by between 0.4 and 1.3 years on average. According to World Health Organization data, poor air quality in the region prematurely claims up to 13,500 lives every year. At the same time, annual healthcare costs caused by coal-fired power plants in the Western Balkans are estimated at €1.2-3.4 billion.

Consequences of air pollution mostly affect citizens of lower socioeconomic status who are often exposed to it, as they live in areas with high-intensity traffic and close to pollution sources, such as power plants and industrial facilities. Also, it is mostly poor people who work “dirty” jobs with professional exposure to fumes, particulate matter, gases, and heavy metals. Combined with climate changes that are causing additional pollution, such living conditions result in shorter life expectancy, which particularly affects the elderly and children under the age of five.

With the "Balkans United for Clean Air" campaign, we demand that air pollution reduction is defined as a national, regional, and international priority, and integrated in all planning processes. We believe that funds for air pollution control need to be increased, and systems should be put in place to monitor pollution and its effects on public health.

In order to improve oversight of polluters and achieve better air quality, it is necessary to establish multisectoral partnerships at local, national and regional levels. The prevention of noncommunicable diseases caused by poor air quality must become an integral part of environmental and healthcare policies.

To preserve and prolong human life together, join us in the solidary struggle of Western Balkans citizens and become a part of the “Balkans United for Clean Air” campaign. 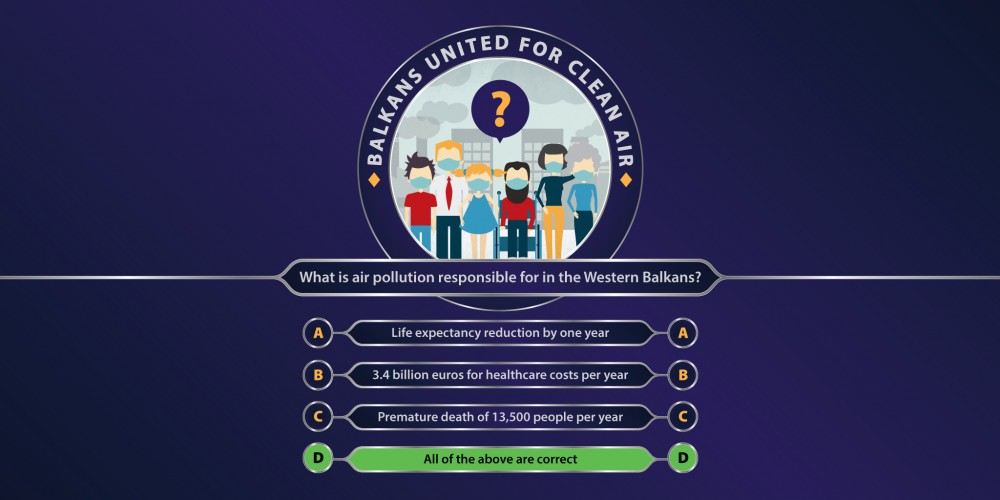 Breathing polluted air leads to increased mortality, shorter life expectancy and a higher rate of chronic diseases. At the same time, healthcare expenses paid by the Western Balkans citizens are increasing. Air pollution also causes a growing number of working days lost, along with the number of hospital days. Air pollution reduction is a public health measure which would directly help improve the citizens’ quality of life and health and, indirectly, lower mortality rates.

Poor air quality in the Western Balkans places the region at the top of Europe’s most polluted areas and causes a growing decline of public health. The region’s countries are particularly jeopardized because air pollution combined with a lower level of economic development, poverty and subpar healthcare systems, adds up to create a lethal situation.

Some of the main sources of air pollution in the Western Balkans include the use of coal for energy production, combustion of coal and wood in residential and commercial facilities, industry emissions, waste combustion, agriculture and construction activities, transport vehicles, and diesel generators. These sources are also the main locations of origin for particulate matter (PM2.5 and PM10), ozone, nitrogen oxides, sulfur dioxide, carbon dioxide and heavy metals, which are globally responsible for millions of premature deaths every year.

Apart from that, Western Balkans is among the regions most affected by the impact of climate change. During the last decades, a significant increase in heat waves has been documented – today, their number has approximately doubled compared with the mid-20th century. Warmer weather conditions suit the formation of ozone, one of the main polluters during the warmer part of the year. Also, it has been indicated that warmer weather and higher carbon dioxide concentrations in the atmosphere contribute to longer vegetation and pollination periods. This causes higher pollen concentrations in the air, which can have negative effects on persons with allergies, as well as asthma patients.

Who is paying for the consequences of air pollution?

The consequences of inhaling poor-quality air is paid by all of us, with certain social groups being more vulnerable to it.

The price of air pollution is paid in human lives. According to World Health Organization’s data for 2016, there have been around 13,500 premature deaths in our region, as a consequence of the worst air quality in all of Europe. According to estimates by the European Environment Agency from 2012, air pollution in Western Balkan countries has led to 22,670 premature deaths attributable to excessive particulate matter (PM2.5) pollution; 1,060 due to excessive ozone (O3) pollution; and 1,670 deaths due to excessive nitrogen dioxide (NO2) pollution.

The Joint Research Centre of the Evropske unije states that air pollution, on average, contributes between 4% and 19% of the total premature mortality rates, and decreases life expectancy by 0.4-1.3 years in countries of the Western Balkans.

Air pollution has a bigger effect on shortening the lives of the elderly population and children under the age of five, which is particularly the case in low-income countries. On a global level, around 75% of deaths caused by air pollution occur in people older than 60. In December, these facts have been confirmed in court for the first time. Namely, a British court admitted medical evidence that showed that a 9-year old girl had died from air pollution.

Persons of a lower socioeconomic status are often more exposed to air pollution since they tend to live in areas of high-intensity traffic and close to pollution sources, such as power plants and industrial facilities.  In addition, in most cases poor people work “dirty“ jobs which implies professional exposure to fumes, particulate matter, gases and heavy metals.

Finally, the price of air pollution is reflected by healthcare costs. It is estimated that just coal-fired power plants in the Western Balkans cause economic damages in the form of healthcare expenses ranging from €1.2 to €3.4 billion every year.

How can we achieve better health and cleaner air in the Western Balkans?

Based on the presented data, the conclusion is clear: in order to save human lives and preserve public health, we must improve air quality as soon as possible, as well as the state of public health, by advancing healthcare systems.

It is necessary to define the reduction of air pollution as a national, regional and international priority, and integrate it in state and city development planning processes. However, most importantly, these measures must not remain a dead letter, and adequate resources must be provided for their implementation. Therefore, Western Balkan countries would have to increase their national and local budgets for air pollution control and set priorities which aim to reduce the impact of pollutant emissions on the population and the environment.

In order to advance oversight of polluters and improve air quality, multisectoral partnerships need to be established at local, national and regional levels.  The prevention of noncommunicable diseases which come as a result of poor air quality should be made an integral part of environmental policy priorities. In addition, this must be accompanied by measures to address climate change, which increasingly influences almost all aspects of life.

Finally, the reduction of mortality rates, prolonging life expectancy and lessening the healthcare costs of breathing polluted air, also requires bottom-up citizens’ action. Namely, the air pollution issue – one that knows no borders between Western Balkans states – can only be resolved in a solidary fashion, at a regional level.