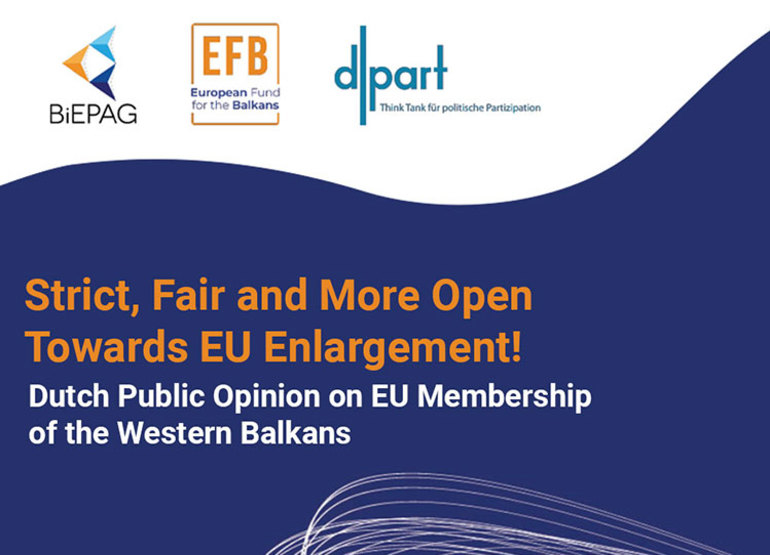 The European Fund for the Balkans (EFB) with its Balkans in Europe Policy Advisory Group (BiEPAG) and the partners from DPart presented the results of the research study at the event Do Dutch support EU enlargement with the Western Balkans? which was hosted by the Clingendael Institute on Friday 25 November 2022 in the Hague.

Dutch Public Opinion on EU Membership of the Western Balkans

In 2019, the Dutch parliament vetoed the start of EU accession negotiations with Albania. Together with the simultaneous French veto against the start of talks with North Macedonia and Albania, it became clear how fragile the efforts to expand the EU in Southeastern Europe are. Many observers classify the Netherlands as fundamentally skeptical about enlargement, which is often attributed to a negative attitude towards EU enlargement among the Dutch population.

Although several surveys have confirmed this negative attitude in the Netherlands, most of them only examine the subject superficially. It is still unclear how deeply rooted this rejection in the population is, whether this topic is of great importance to the population in the Netherlands, and how the negative attitude towards EU enlargement is related to attitudes towards the European Union per se.

Building on and expanding existing research study on France, the European Fund for the Balkans with its’ flagship initiative Balkans in Europe Policy Advisory Group and the German based think tank for political participation DPart, created and implemented comprehensive high quality research to inform and enrich the public and policy debate on Western Balkan EU Enlargement in the Netherlands.

Our research study aims to provide answers to a list of open questions. It is a result of the representative opinion poll on this topic in the Netherlands. In addition to the survey, interviews with Dutch politicians at national and European level as well as focus groups with Dutch citizens were conducted.

The survey examines in depth the attitudes of the Dutch population towards EU enlargement in the Western Balkans, the perception of previous EU enlargement steps, and the general view of the EU.

If you think Dutch are against enlargement, think again. Having in mind the traditional negative attitude of the Dutch towards enlargement, the data speak the opposite. 45% of the population are for future EU membership of the #WB6 a minority of 34% oppose it. Our study shows that those who support EU Enlargement with the Western Balkans are also those who have a more positive image of the EU. More than two thirds among the enlargement approvers view the EU positively.

Following the Dutch EU Enlargement motto “strict but fair”, overall, two out of three respondents state that candidate countries should join if the accession criteria are fulfilled.

Close to 90 percent of the EU Enlargement approvers agree with the statement, but even close to 50 percent among those who do not want the Western Balkans countries to join the EU approve it as well. This strong finding is also confirmed by the focus groups. Even some of the EU enlargement disapprovers are ready to change their attitude and are open towards new countries joining the EU if accession criteria are fulfilled and the alignment is “properly checked”.

This is just a portion of the overall results from the research that will be directly useful for all interested parties to have a better-informed debate and to improve the discourses about the Western Balkans within the European Union and its member states.