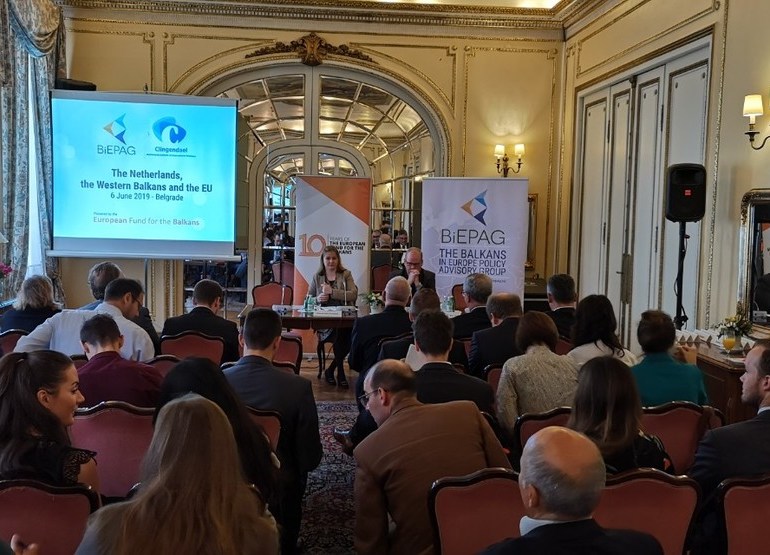 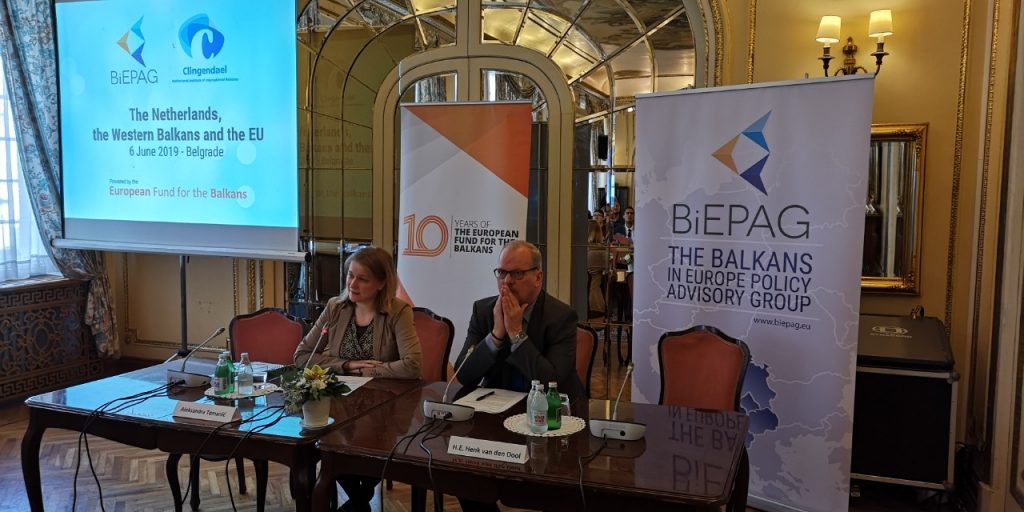 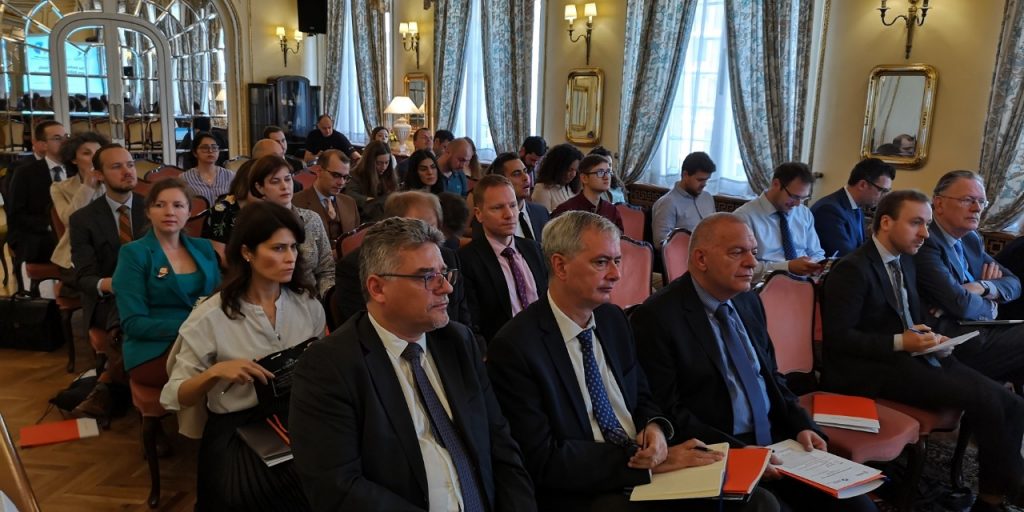 The discussion was opened by Aleksandra Tomanic, Executive Director of the European Fund for the Balkans and H.E.Henk van den Dool, Ambassador of the Netherlands to Serbia. Ms. Tomanic pointed out that this follow up to the recent BiEPAG event “Serbia, the Western Balkans” which was organized in partnership with Clingendael Institute is just supporting the very idea of EFB and BiEPAG to stimulate frank exchange and discussion between the leading think tanks in the EU and in the region. - After the last weeks progress report by the EC, and the clear messages that countries of the region have received, it is now extremely important to talk about whether the member states will embrace and support the EC findings and the assessment in June. The Netherlands is one of the EU members, which is renown for its “strict but fair” position vis a vis EU. The main reason for this political stand lies in the Dutch’s firm position regarding the respect of the rule of law and democracy as a crucial condition for joining the EU. The Dutch Ambassador in Serbia, H.E. Henk van den Dool discussed the Dutch Parliament stance when it comes to opening negotiations with Albania and Macedonia, which is according to him a direct reflection of the general mood in the Dutch society and its attitude towards the inflow of migrants, the migrant channels through Holland to United Kingdom and some stereotypes that are already embedded in the minds of the people. He insisted that the EU fundamentals should be widely discussed outside the conference rooms, the political circles and the think-tank events, since the real debate should be at our homes, in the schools, in every little corner of the countries. -I’m leaving Serbia sadder and wiser than four years ago when I took over this position. The political will can move things forward or hold them back. The latter is now the reality of Serbia. The citizens must insist on transparent and predictable legal system, respect of the fundamental rights, media freedom, as these are the prerequisites for a democratic society. 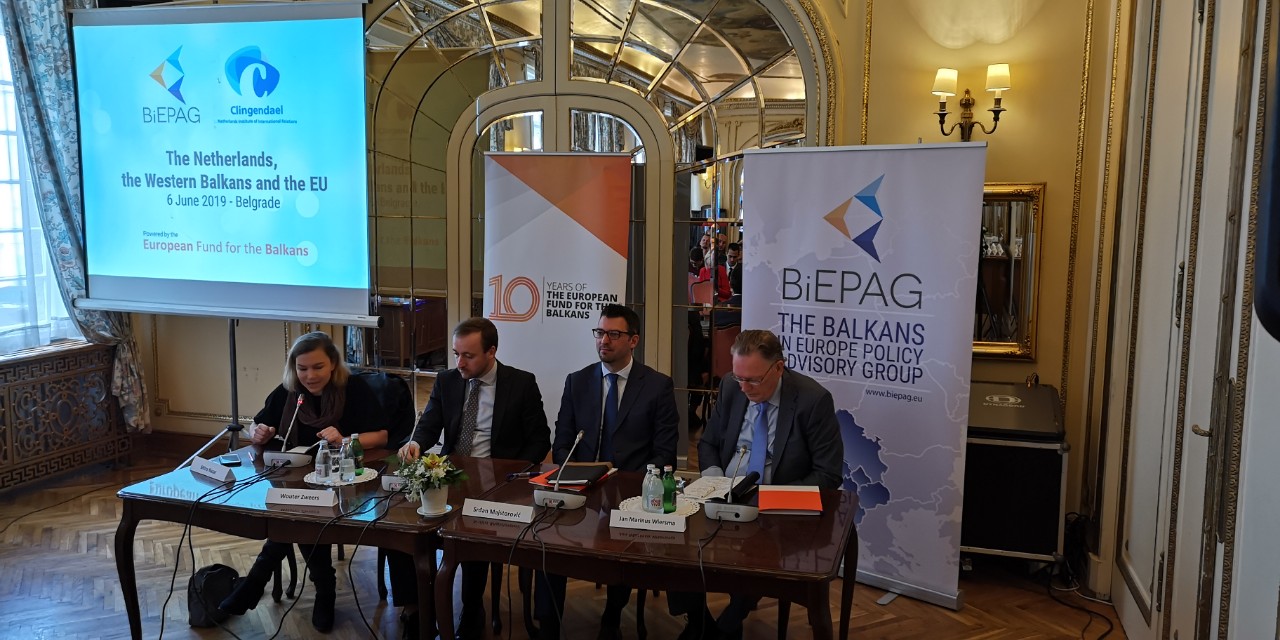 In the first panel Wouter Zweers (Clingendael Institute), Jan Marinus Wiersma (Clingendael Institute) and Srdjan Majstorovic (European Policy Centre / BiEPAG) discussed what the real obstacles to the EU enlargement are and whether this stuck process can be overturned. This panel was moderated by Mitra Nazar (NOS). According to Wouter Zweers there is a common interest for the citizens of the Western Balkans and the Netherlands and it is connected with stable democracy, security and freedom of expression. He added: - 65% of the Dutch citizens are against EU Enlargement. This may also be a result of lack of knowledge and I believe that the Dutch politicians should pay more attention on this. Srdjan Majstorovic added that EU should make the move when it comes to Albania and Macedonia, the economic development and security of the region are on the table, along with the fact that citizens of the Western Balkans can benefit from stable democracy and the rule of law. - European politicians need more courage to speak to their citizens on the common challenges and interests of having the Western Balkans in the EU. Both the EU and the Western Balkans are now failing to communicate the benefits of the European Union. On the other hand, Jan Marinus Wiersma who has been dealing with the foreign affairs topics and the Balkans in the last 35 years was clear when saying that the negotiation process is just a commitment to work, but it is nonsense to think it is a guarantee for membership. Better communication, building a relationship based on mutual trust and a genuine political will are necessary for both the Western Balkans and EU, concluded Mitra Nazar as moderator of the Panel 1. 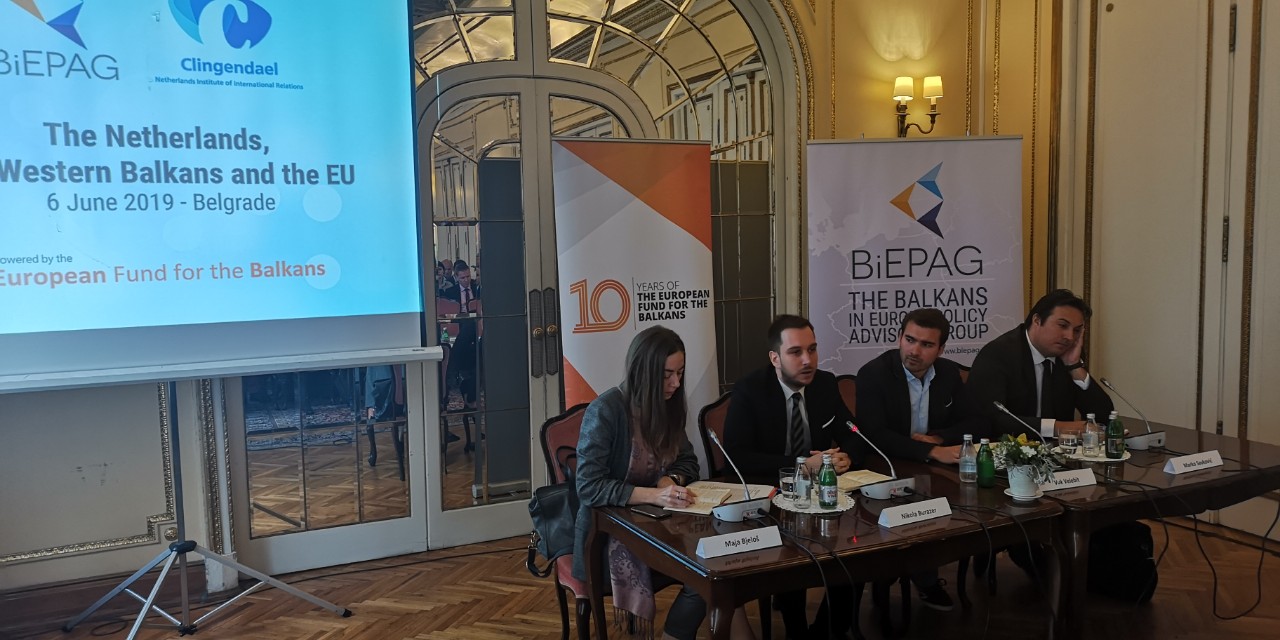 The speakers of the second panel Nikola Burazer (European Western Balkans), Vuk Velebit (Political Analyst, Talas.rs) and Marko Savković (Belgrade Fund for Political Excellence) discussed what is the reality, what are the causes and consequences of a foreign influence in the Western Balkans. This panel was moderated by Maja Bjelos (Independent Security Expert). -If we look at the facts, the EU is still a dominate trade partner and investor in the Western Balkans compared to both Russia and China. As for Russia it is preventing the consolidation of the region with its influence in each WB state separately, and that is why it is the biggest threat to EU Enlargement – stated Nikola Burazer, Executive Editor of the portal European Western Balkans. Marko Savkovic believes that EU should provide a comprehensive plan on how to address the foreign influences. -Foreign influence will grow, because it is fueled by domestic demand. We must point out that Russia and China have become more assertive in projecting power in the areas of strategic importance as infrastructure, cyber security, etc. Vuk Velebit as an author of the MA thesis on the creation and spread of the pro-Russian narrative in Serbia media concluded: -I believe that Russia doesn't need to invest anything in regard of the pro-Russian narrative in Serbian media since there is already a strong pro-Russian public opinion. Russia acts as a spoiler in the Western Balkans and it uses every opportunity to poke the eye of the West. 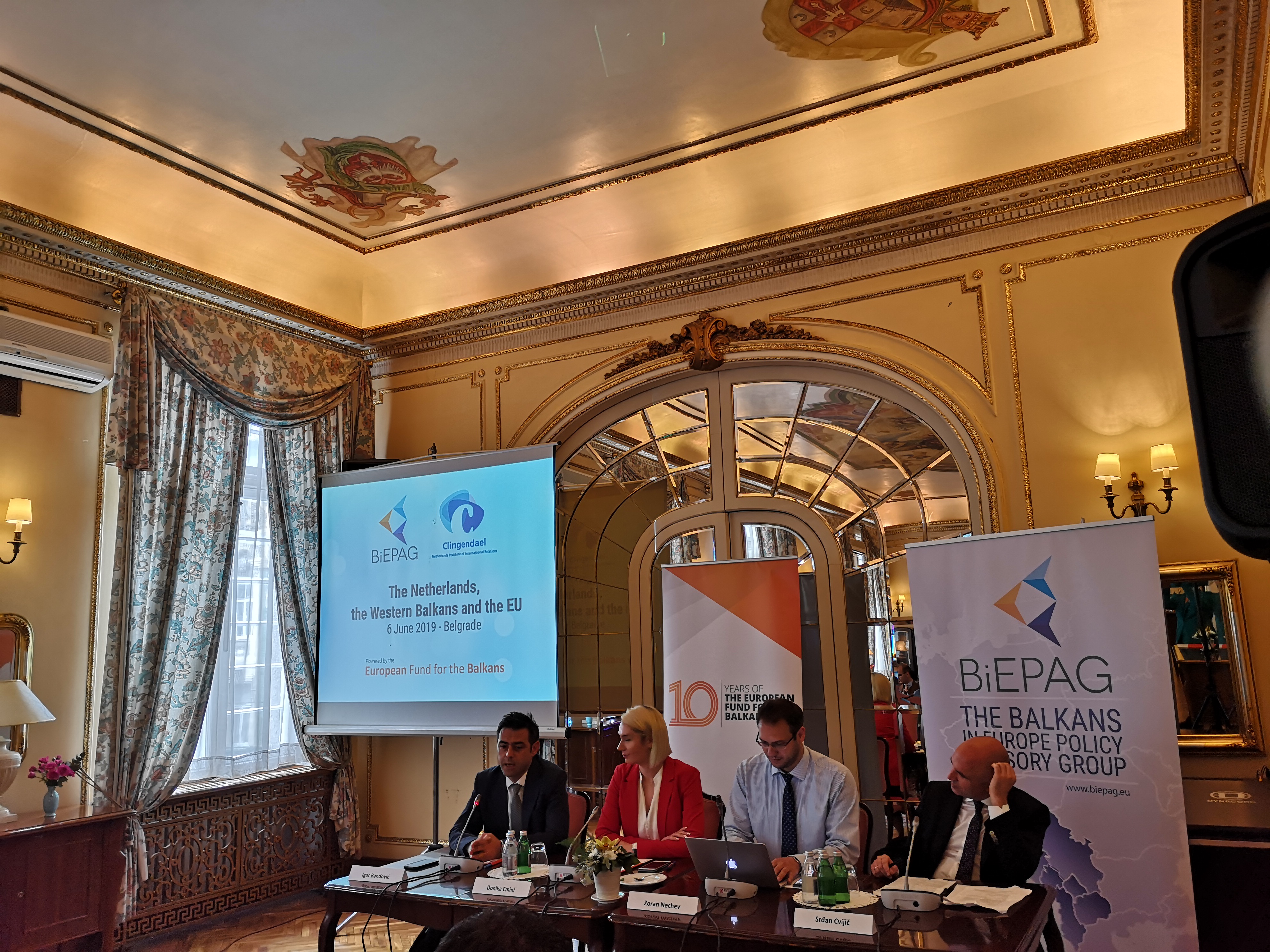 In the third panel, Donika Emini (Kosovar Centre for Security Studies / BiEPAG), Srdjan Cvijic (Open Society European Policy Institute / BiEPAG) and Zoran Nechev (Institute for Democracy “Societas Civilis” / BiEPAG) discussed the regional cooperation and good neighbourly relations. Specifically, the negotiations between Serbia and Kosovo on land swapping in the context of democratisation of the region will be addressed. This panel was moderated by Igor Bandovic (European Fund for the Balkans). Donika Emini openly argued that when it comes to Serbia and Kosovo they used to fake the dialogue, and now they don't even bother to do so. The latest report was just technicalities, which just supports the anti-EU atmosphere. It is also not popular to talk about lifting the tariffs on Serbian goods in Kosovo, since the tariffs are useful tool for political manipulation in the hands of populist leaders, especially ahead of the elections, said Emini. In that line and having in mind the recent developments, Srdjan Cvijic argued that warmongering and anti-EU propaganda can’t bring any good to the Kosovo and Serbia dialogue. – In Serbia, pro-Russian propaganda carried out by the pro-regime media has intensified since the beginning of the dialogue between Belgrade and Pristina. A compromise solution between Kosovo and Serbia is impossible without stopping the anti-Western and anti-Albanian propaganda in Serbia. Zoran Nechev stated that solving the bilateral dispute between Macedonia and Greece on the name issue is definitely a regional success story that can be shadowed if North Macedonia does not get the date. - Democracy is a precondition for resolving bilateral issues. The strongmen strive to preserve their power and democratic leaders to solve problems. A Greek-Macedonian settlement was possible because of the will of two governments that came to a solution through a direct negotiations.