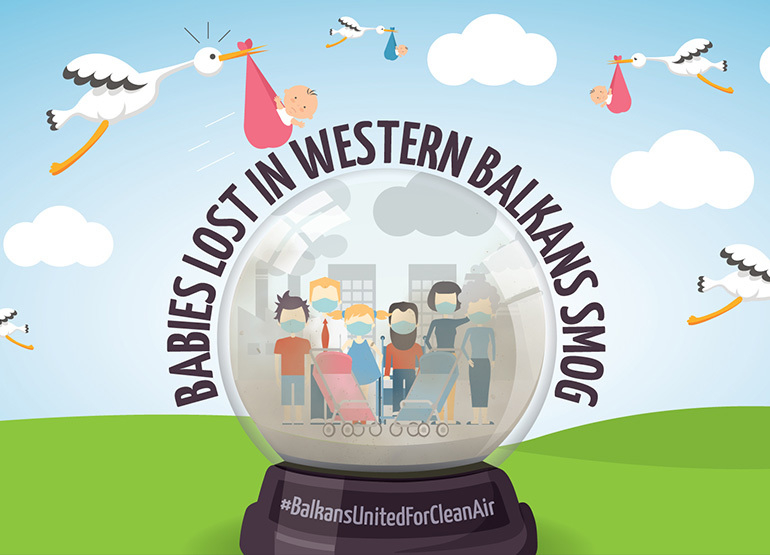 Air pollution is among the causes of increased infertility and growing sterility rates in women and men across the Western Balkans. It particularly affects women living in polluted areas, since poor air quality may cause a reduced number of healthy egg cells and thus decrease fertility rates, also lowering in vitro fertilization success rates. Long-term exposure to polluted air in the Western Balkans can decrease female fertility by more than 10 percent; periods of high pollution levels reduce chances of conceiving, and increase the risk of miscarriage. In men, particulate matter pollution reaches the testicles where it decreases sperm production and motility, also causing more frequent miscarriages due to programmed cell death.

Several international studies have linked air pollution with infertility, childbirth complications, a higher rate of congenital abnormalities in offspring, and stillbirths. The fertility rate is statistically decreasing with the increase of air pollution. Certain air pollutants, such as lead and copper, disrupt the function of glands in the human organism, which has a negative impact on reproduction.  Another cause is plastic pollution, particularly by micro- and nanoplastics which is steadily growing, mirroring the increase in plastic manufacturing – surpassed only by the production of steel and cement. Just one cycle of a washing machine with synthetic laundry releases more than 700,000 plastic fibers.

Plastic pollution is a global problem, given that plastic particles are spread by rain and wind, after plastic waste decomposition and combustion, which is a particularly burdensome issue in countries of the Western Balkans. Recent research results have clearly shown that polystyrene, a type of plastic, found in food, water and air in its micro and nano form, affects early embryo development, which, at a later stage, could cause abnormal development and preterm birth.

Air pollution as a cause of female infertility

Poor air quality causes both female and male infertility. However, the consequences of inhaling polluted air vary slightly, in accordance with physiological differences. Several studies have proven that women who inhabit polluted areas have fewer vital egg cells, lower fertility rates and a higher rate of unsuccessful embryo implantation during in vitro fertilization, compared with women who are not exposed to the impact of air pollution. Fine particulate matter PM 2.5 decreases egg cell quality, reducing fertility by 2% per 10 µg/m3 in the air. Western Balkan cities most affected by pollution record an annual average of over 50 µg/m3, which is double the maximum permitted annual values, whereas the daily levels often exceed 200 µg/m3. Long-term exposure to polluted air in the Western Balkans can reduce female fertility by more than 10%; high daily pollution levels reduce the chances of conception, and increase the likelihood of miscarriage.

A study from Brazil has shown that women exposed to high PM 10 levels (>56.72 µg/m3), which is the case in several cities across Western Balkans, have higher miscarriage rates, despite the fact that they have undergone the process of in vitro fertilization. At the same time, a 2010 study focusing on the town of Labin, Croatia, shows that the incidence of miscarriages and stillbirths was significantly higher during the period of exposure to air pollution produced by the nearby coal-fired power plant, compared to the period without such exposure. Sulfate compounds created by the process of coal combustion increase the risk of miscarriage by up to 13%, while exposure to PM2.5 and PM 10 reduces conception rates.

This data prompts the obvious conclusion that air pollution has a negative influence on female fertility and that a radical improvement of air quality is necessary so as to revert fertility rates to normal, and render in vitro fertilization more efficient. Air pollution also a cause of male infertility. During pregnancy, women are more vulnerable to air pollution; however, poor air quality causes infertility and sterility in men, too. Several studies have indicated that PM10 and PM2.5 particulate matter, apart from being able to penetrate lung alveoli, can also reach the testicles and reduce fertility, cause fetal anomalies and increase the likelihood of miscarriage. A Czech study has shown that air pollution is also linked with a decline in sperm motility – a parameter of major importance for natural fertilization.

In 2019, one in six couples in Serbia experienced problems conceiving, and the situation was similar in other Western Balkan countries, too. This also causes a growth in the number of patients requiring medical assistance and who are increasingly undergoing in vitro fertilization. Laboratory air pollution is an additional problem when tackling the issue of sterility, since it decreases the vitality of egg cells, sperm and embryo, thus also reducing in vitro fertilization success rates. For instance, in case of an internal filtering system malfunction, the pregnancy rates following in vitro fertilization drop significantly. After new filters are installed, the success rates return to normal values. However, if patients are constantly exposed to contaminated air, the problem of sterility and loss of pregnancy may persist regardless of modern laboratory technology. In the USA, 7 out of 10 leading laboratories operate in clean rooms, where every possible form of contamination is eliminated. This example, along with a comprehensive reduction of ambient air pollution, should be followed by Western Balkan countries. Such conditions not only increase success rates, they also prevent harmful matter’s impact on laboratory air. These include volatile organic compounds which can hamper early embryo development.

How can infertility rates in the Western Balkans be reverted?

Reverting infertility rates in the Western Balkans requires, apart from various health measures, urgent action to improve air quality. Pollution caused by particulate matter, sulfur oxides and heavy metals must be reduced as soon as possible, so that fertility rates can gradually return to normal values. Phasing out coal in the production of electricity is the most important measure for air quality improvement. The replacement of household heating and cooking appliances with environmentally cleaner solutions, solar panels on house and building rooftops and projects aimed at improving energy efficiency can have an important role, too. Action must be taken sooner rather than later – namely, if we observe infertility through a time prism, it is constantly growing and thus represents one of the major factors in the population decline of the Western Balkan countries. Another measure to lessen air pollution’s harmful impact is by reducing single-use plastic, especially non-recyclable packaging, as well as replacing synthetic fiber with natural fiber.

Countries in the region should support reproductive endocrinologists and gynecologists in promoting healthy pregnancy, by educating women to adopt a safe lifestyle during the pre-conception period. In order to reduce infertility rates, it is necessary to ensure highly efficient indoor air filtering systems, along with providing timely information for citizens on air pollution so as to avoid open-air activities during periods of poor air quality. This measure is particularly significant for special institutions for the treatment of sterility. This way, they would create optimal conditions for patients during the in vitro fertilization process and reduce the negative effects of laboratory air pollution on the highly sensitive egg cells and embryos. Infertility treatment and in vitro fertilization must become much more available to all persons who want to have children. This type of treatment has become a privilege today, couples who want to have children must bear significant costs, and the process often involves travelling abroad for certain procedures.

Apart from instant short-term improvements, it is also necessary to advance the capacities of diagnostic centers; support the realization of joint studies which will use monitoring and measuring data from Western Balkan countries. The joint creation of interactive maps and mathematical models would summarize the short- and long-term exposure to harmful airborne pollutants, with a special emphasis on their effects on infertility, preterm births, onset of disease and stillbirth rates. Finally, Western Balkan countries, instead of focusing only on birth rates, must get to work and provide people who wish to have children with support and conditions in which the children will be able to grow and breathe clean air.

Miodrag Stojković, our prominent professor of human genetics and the founder of a special hospital for the treatment of sterility in Leskovac, has authored an expert analysis of air pollution’s harmful effects on fertility in women and men in region for the "United Balkans for Clean Air" campaign. There has been no progress in this area since last year’s beginning of the "United Balkans for Clean Air" campaign and the warnings issued by Professor Stojković – cities in the region, unfortunately, remain at the top of global lists of cities with the most polluted air.