BiEPAG Experts at the Western Balkans Think Tank Forum in Skopje, 8-10 of March, 2020 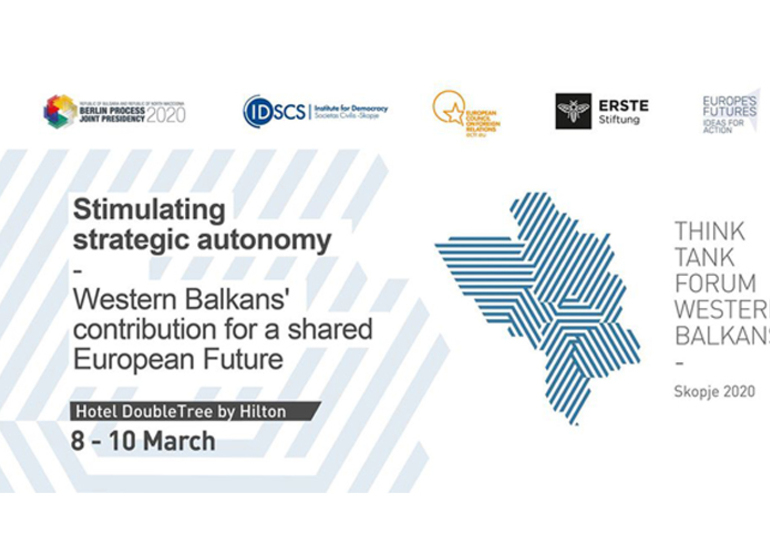 The Institute for Democracy “Societas Civilis“ Skopje (IDSCS) together with the European Council on Foreign Relations (ECFR) Sofia will host the Western Balkans Think Tank Forum in Skopje under the title “Stimulating strategic autonomy. Western Balkans’ contribution for a shared European Future”. This event is an integral part of the 2020 Berlin Process Co-Presidency programme hosted by the governments of the Republic of Bulgaria and the Republic of North Macedonia.

The forum aims at bringing together think tankers, civil society representatives and academia from the Western Balkans and EU countries participating in the Berlin process to tackle the most pressing political, economic and social challenges of our times. Foreign ministers from the region together with other state representatives from the EU countries involved in the Berlin Process will also participate in an open and critical dialogue on shared challenges and common visions for the future of the Western Balkans as part of a strong and united Europe.

Our BiEPAG experts Tena Prelec, Jovana Marovic, Donika Emini, Corina Stratulat and Milica Delevic will be part of the agenda as speakers in the respective sessions dedicated to the rule of law, future of Europe and migration.

During the event, the gathered experts community will also discuss different challenging areas of European integration including questions of economic and social convergence, environmental issues and hybrid threats. More general outlooks on the future of Europe, based on the accumulated knowledge and expertise of European Think Tanks, should inspire and encourage participants and governments alike to take ambitious steps towards a shared European future.

The event will be live streamed on the official YouTube channel of IDSCS.

The working language of the conference will be English.

Participation requires an invitation from IDSCS or partners and an official registration before the event.