Laying all cards about air quality on the table 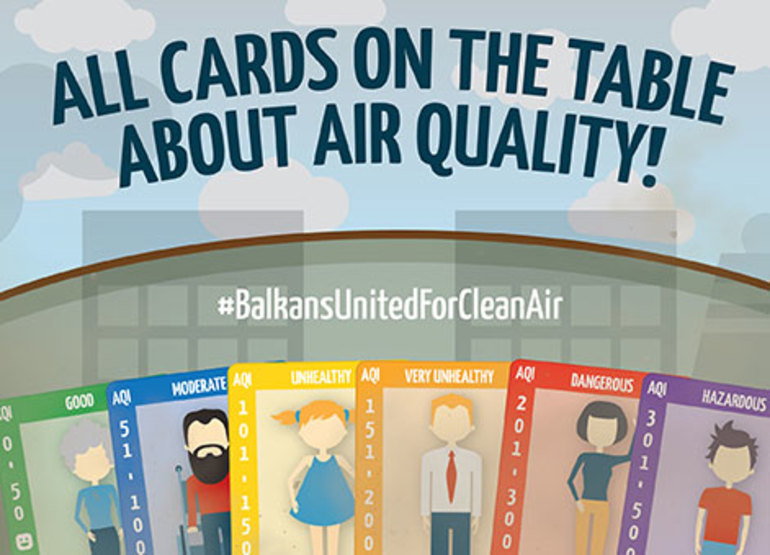 Despite significant advancements that took place since the establishment of air quality monitoring stations and public information systems in the region's states, the quality and amount of data have yet to reach satisfactory levels, and the official results need to be much more publicly available and clear.

Public pressure remains a crucial factor in improving the monitoring systems and fulfilling one's right to be informed about the pollution levels.

The most sophisticated measuring stations in the Western Balkans are managed by the respective ministries of environement and other institutions under their auspices.

The government and local self‐governments are legally required to monitor air pollution, inform citizens on the results and create plans and implement improvement measures when the permitted pollution ceilings are exceeded.

Despite advancements that took place since the establishment of air quality monitoring stations, there is still insufficient territory coverage. The quality and amount of data have yet to reach satisfactory levels, and the official results need to be much more available and clear.

If it weren't for popular websites and mobile applications that provide real‐time data from the majority of stations in the world, the inhabitants of many cities would have to rely on local institution websites' information. Those are still often belated and the data is not presented in an easily understandable manner.

Numerous areas, including urban ones, are yet to be covered by monitoring stations or still lack measurements of all the relevant pollutants. The inhabitants of sparsely populated areas and people without access to the internet are mostly kept in the dark. If they received information on outdoor, i.e. ambient air pollution reaching dangerous levels, they could limit their outdoor activities and keep their windows closed until the worst is over, as is recommended in such situations.

Weather conditions also affect the concentrations of air pollutants, yet the competent institutions in the Western Balkans are still not publishing air quality forecasts.

According to findings by the European Commission1 , we have the least available data about the levels of particulate matter in the PM 2.5 category (diameters of 2.5 micrometers and smaller), given that many stations either do not measure them at all or do so with interruptions. This is one of the most dangerous pollutants – finest, invisible dust penetrating the body, even through the skin.

There is a lack of chemical analyses which would determine the source and levels of airborne secondary particles. Namely, monitoring stations cannot determine the origin of the particulate matter, and some types of PM do not reach the atmosphere directly from combustion, but are the result of other pollutants' chemical reactions.

Institutions in charge of monitoring have insufficient financial and human resources, as is stated in the World Bank's reports on North Macedonia2 , Bosnia and Herzegovina3 and Kosovo4 .

Data validity, both in national reports and in those submitted to the European Environment Agency (EEA), varies in different locations and countries. Hourly measurement results are the main criteria. European standards require an annual 90% data availability; however, the registry also contains data from measuring stations that achieve at least 75%.

The European Commission states that the number of stations delivering data to the Agency is limited. Most of them are located in North Macedonia.

Data quality requires regular maintenance of state‐managed network devices, which is expensive. The biggest funds are required for the automatic measurement of PM levels, and slow procurement procedures have been causing month‐long delays5 6.

The majority of the region's countries lack a precise registry of the sources and levels of pollutant emissions7.

Making decisions on measures to improve air quality requires detailed monitoring of the situation, along with official reports containing aggregate data. If there is no constant measuring, health care institutions are unable to monitor and study the effects of air pollution.

The bulk of responsibility for the pollution monitoring and public information systems lies with the governments of the region's states. In order to overcome these challenges, there need to be major investments, but many of the problems can be resolved merely by displaying political will – the central authorities have the power and capacities to improve cooperation and coordination with lower administrative levels and enable exchange of information. They are also in charge of improving the monitoring stations' maintenance process and including more of them in the European system.

Whether it is a matter of pollution increasing in some areas or us having merely become more aware of it due to more data being available, there is another important factor when it comes to political will. Namely, pressure from the public. It is obvious that citizens and environmental protection organizations must demand the fulfillment of their right to information when it comes to the air we breathe.

The power of association

The pressure exerted on institutions has already been amplified by the popularity of air pollution monitoring websites and mobile applications that provide aggregate data and simple access to information on cities and states from the entire region. Their continued development, along with enabled access to historical data and its comparative analysis, will further mobilize the population and raise awareness with regard to this burning issue.

Lately, citizens have been linking the data from the applications with those gathered by their household air pollution measuring devices. These are not as precise as official stations – however, combined with meteorological data, they can be a helpful asset for pollution forecasting. Transferring information from personal devices to applications is also useful for people in areas that still lack official monitoring units.

One of the main tasks is the creation of a catalog/inventory of sources, types and amounts of pollutants, in order to register the share of individual human activities in causing air pollution. Local self‐governments play a vital role in this matter. Namely, this information will be complete only if it includes household heating devices and the type of fuel that they use. Speaking of municipalities and cities, they can also contribute by publically placing digital displays of information on air pollution.

By signing the Sofia Declaration in November 2020, Albania, Bosnia and Herzegovina, Montenegro, Kosovo, North Macedonia and Serbia have agreed to the Green Agenda for the Western Balkans, which defines the regional states' obligations in improving monitoring and reporting efforts, and opens a path towards EU funds.

Finally, being well‐informed on this matter is possible only with the involvement of the media – public and private broadcasters, local outlets, as well as those with national and regional coverage. In the case of portals and TV stations, it shouldn't be that tall of a task to include an animated figure whose change of color would indicate the current quality of the air we are breathing.