The Western Balkans in times of Pandemic: EU, External Actors and Citizens' Trust 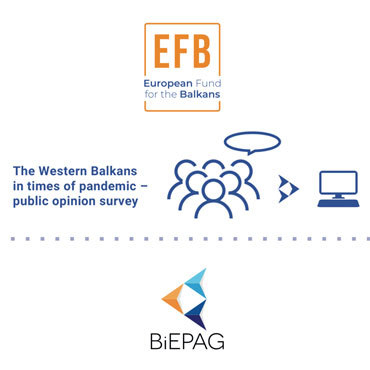 In 2021, the Balkans in Europe Policy Advisory Group (BiEPAG) and its prominent policy researchers from the Western Balkans and the EU were involved in the analysis of the newly formed context. The policy focus was on the Western Balkans in relation to EU integration, elections, civic engagement and conspiracy theories and Western Balkans in times of Pandemic: EU, External Actors and Citizens' Trust. All the analysis and policy briefs were based on the results of the accompanying regional Ipsos opinion polls conducted in Albania, Bosnia and Herzegovina, Kosovo, Montenegro, North Macedonia, and Serbia.

The BiEPAG policy products were disseminated and promoted to decision- and opinion-makers in the EU and in the Western Balkans.

In the interest of promoting independent research, knowledge-sharing and a better understanding of the public opinion in the Western Balkans region, the European Fund for the Balkans has decided to share the complete results of its recent over all-encompassing survey with the public, so as to encourage the media, researchers, civil society and governments for further use of the data. Perhaps this can lead to improved policy making and understanding of the public mood in these difficult times.

The European Fund for the Balkans (EFB) commissioned Ipsos Strategic Marketing to conduct a survey among residents in all six Western Balkan countries (Albania, Bosnia and Herzegovina, Kosovo, Montenegro, North Macedonia and Serbia) on 3 key topics: EU, External Actors and Citizens’ Trust in times of the Pandemic.

The opinion poll was conducted on a nationally representative sample consisting of a minimum of 1000 respondents aged 18+, by means of telephone and online interviews.

Unfortunately, there is a shortage of public opinion surveys that encompass the entire Western Balkans and allow for comparisons between countries in the region.

With this in mind, the members of the Balkans in Europe Policy Advisory Group (BiEPAG) have produced policy briefs on their assessment of the data’s implications on the key topics.

Three BiEPAG policy analysis were produced based on the data of the Ipsos regional public opinion poll:

The whole EFB commissioned Ipsos survey can be downloaded at the following link.