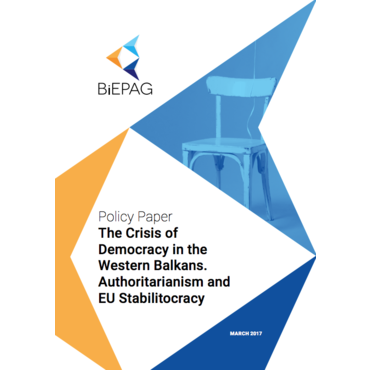 The Crisis of Democracy in the Western Balkans. Authoritarianism and EU Stabilitocracy 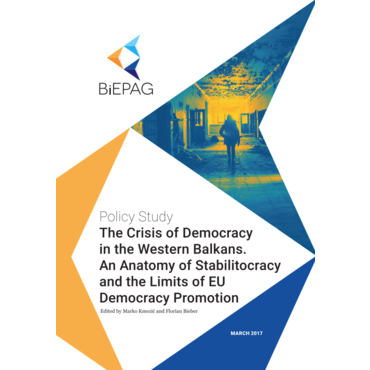 The Crisis of Democracy in the Western Balkans. An Anatomy of Stabilitocracy and the Limits of EU Democracy Promotion 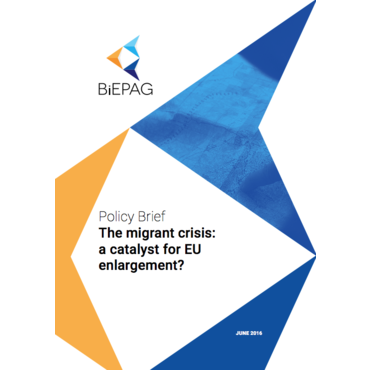 The Migrant Crisis: A Catalyst for EU Enlargement? 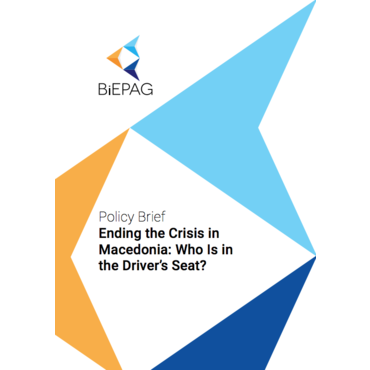 Ending the Crisis in Macedonia: Who Is in the Driver’s Seat? 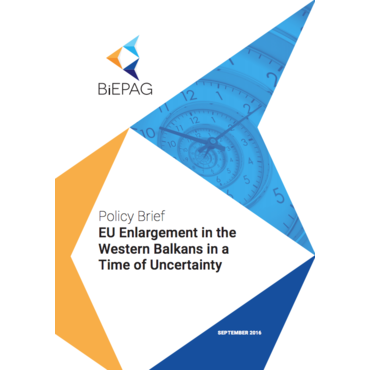 EU Enlargement in the Western Balkans in a Time of Uncertainty 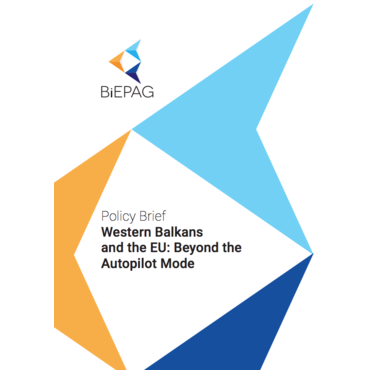 Western Balkans and the EU: Beyond the Autopilot Mode

As hundreds of thousands of refugees make their way through Macedonia, Serbia, Hungary and Croatia to other EU countries, the Western Balkans have remerged in international news headlines - once again with pictures of refugees with their few belonging walking on foot along routes, stuck on borders and making their way westwards. This renewed attention on the Western Balkans primarily highlights the larger weakness of the EU to address this challenge. The countries of the region have been places of transit, and the refugee trek has left its traces and is likely to have lasting, even if hard-to-predict repercussions on the region. 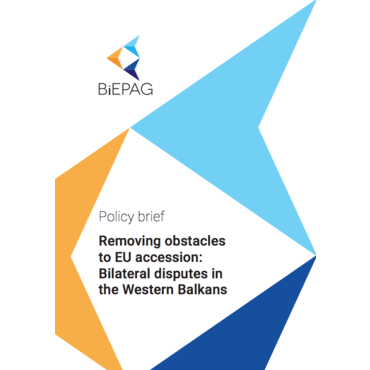 The EU accession countries of the Western Balkans (WB6) have come a long way since the wars of the 1990s. Besides progress at the individual country level, the emphasis within the EU accession framework upon regional cooperation and good-neighbourly relations has contributed to an overall strengthening of relations between the WB6 and their EU neighbours. Nonetheless, the persistence of unresolved bilateral disputes – some open, some only potential – poses a real risk of renewed instability by delaying EU integration and distracting from domestic reforms. It is therefore crucial that on-going international engagement with the region focus on tackling outstanding bilateral issues, both in their own right and in view of removing potential obstacles in the countries’ path towards EU entry. 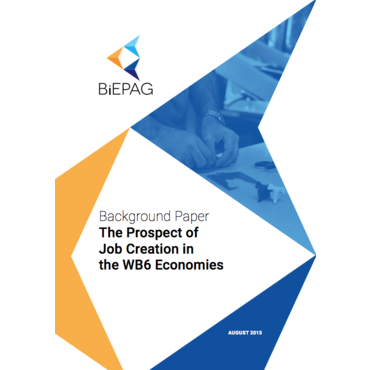 The Prospect of Job Creation in the WB6 Economies

Why don’t improvements in the business environment and deregulation of labour markets always result in the reduction of the unemployment rate? This question is addressed by looking at the relation between the level of regulatory burden for doing business and the labour market, and the unemployment rates in the six Western Balkan countries and territories— Albania, Bosnia and Herzegovina, Kosovo, Macedonia, Montenegro, and Serbia. The sole dependent variable is the level of unemployment, which is examined in relation to the selected World Bank “Doing Business” indicators in the form of overall distance to frontier and labour market regulation pertaining to dismissing workers and tax wedge. The score for the WB6 countries is contrasted with the score of six “frontrunners” (those that are at the frontier) and six “backbenchers” (those that are farthest from the frontier). There is an apparent divergence among these three groups in both the level of unemployment and regulatory burden. 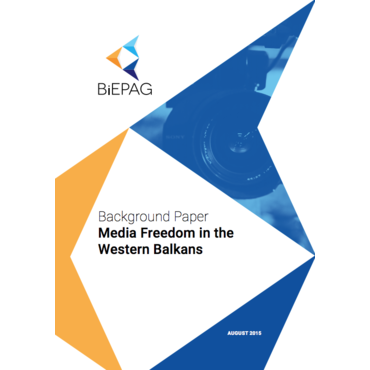 Media Freedom in the Western Balkans

Recent assessments of the situation concerning media freedom in the Balkans have been sobering. The region is brewing with incidents of media freedom violations, which bring under attack not just the basic right to freedom of expression, but also the state of democracy in the region. In addition, some of the same problems that existed a decade or so ago are still haunting the Balkans: political pressure, illegal state subsidies – often in the form of state advertising, reinforced by the economic crisis – professional weakness, and a lack of security for journalists. Although the legal frameworks are essentially in place throughout the region and have mostly been brought up to date with the assistance of international organisations, political elites in the Balkan countries are effectively resisting the implementation of adopted strategies and laws guaranteeing media freedom. Dunja Mijatović, OSCE Representative on Freedom of the Media, declared recently that the state of media freedom in the Balkans today is worse than after the 1990s wars. Her assessment is in line with the findings of this year’s Reporters without Borders World Press Freedom Index and the Freedom House Freedom Press Report, both of which highlight a sweeping deterioration of global press and a massive decrease of media freedom in the Balkan countries. Johannes Hahn, the Commissioner for the European Neighborhood and Enlargement Negotiations, recently claimed that he needed proof—in the case of Serbia—in order to react to alleged media freedom violations. The aim of this analysis is to identify regional patterns and mechanisms of government control and pressure, as well as to offer potential benchmarks on how to effectively assess media freedom in EU accession countries.

Culture of Regional Cooperation in the Western Balkans 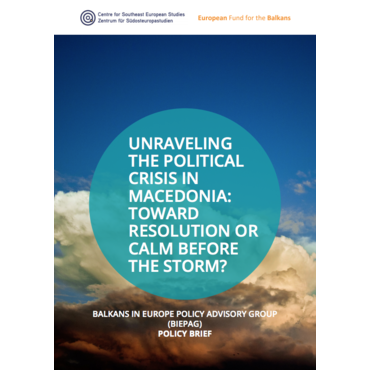 Unravelling the Political Crisis in Macedonia: Toward Resolution or Calm Before the Storm?

In a period of less than two weeks, between the 5th and 18th of May 2015, Macedonia suffered violent protests, a weekend-”war,” resignations from the government, and continued social mobilization for and against the government, which resulted in two big rallies and the setting up of two separate tent camps in the center of Skopje, one against the government and another in its support. Negotiations between the political leaders, facilitated by international actors, brought momentary political stability; however, the question remains whether negotiations will resolve the political crisis in a deeply divided and polarized society or whether they will just be the calm before the storm. The all-day talks on 2 June 2015, mediated by EU Commissioner Hahn, appear to have yielded a tentative first step in resolving the crisis. Now, it is important to build on this momentum and to avoid a return to “normality” without change. 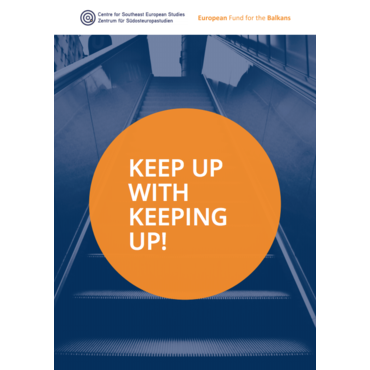 Keep Up With Keeping Up!

Last May, the Balkans in Europe Policy Advisory Group (BIEPAG) published the report “The Unful-filled promise: Completing the Balkan Enlargement”. The report identified four different scenarios highlighting opportunities and risks for the enlargement process. While there were some positive developments since the launch of the first BIEPAG report (among others, Albania became a candidate country; a proposal for the Stabilisation and Association Agreement with Kosovo was adopted by the Commission; the launching of the Berlin Process), the words of the incumbent Commission President that no further enlargement would take place over the next five years cast a long shadow over the enlargement process. This year’s report will look at developments in the EU and the region to examine how they fit with our previous analysis and will make recommendations aimed, if not to shorten the time in the waiting room, to at least make it more rewarding. 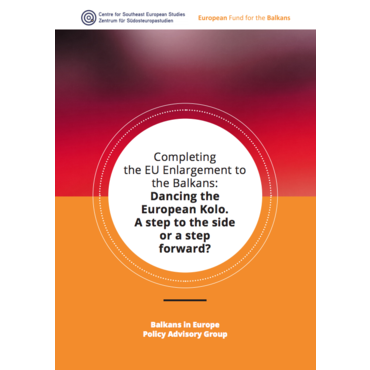 Completing the EU Enlargement to the Balkans: Dancing the European Kolo. A step to the side or a step forward?

This BiEPAG’s policy brief builds on its May 2014 Policy Paper, where different scenarios for the future of the Western Balkans were analysed, coupled with a specific set of recommendations on how to reinvigorate the EU accession process in the region, with particular focus on unresolved bilateral relations and internal political dysfunction in Bosnia and Herzegovina. The aim of this Brief is to consider the latest developments related to the EU enlargement to the Western Balkans, namely the election of the new European Commission, the new initiative for the restart of Bosnia and Herzegovina’s accession, the announcement of new bilateral conditions, and the on-going deterioration of regional cooperation. 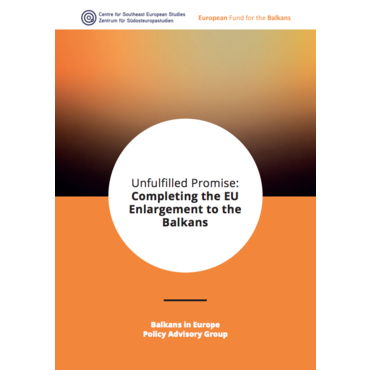 Unfulfilled Promise: Completing the EU Enlargement to the Balkans

Eleven years after the EU committed itself to the European future of the Western Balkans, only one country—Croatia—managed to join. The accession process remains slow and the remaining aspirants in the region are unlikely to enter the EU before the end of the decade. In addition to an increasingly demanding conditionality, member states seem to be intervening more often with the integration process, often delaying in predictable ways. As a majority of citizens in many EU member states oppose further enlargement, membership seems remote and uncertain for many countries in the region. This policy paper explores the risks and opportunities that different potential paths in the integration process can take.