Recent electoral outcomes have challenged the notion that elections in the Balkans are not able to bring about change. How has the public responded? It is argued that, in spite of the manifest obstacles for challengers to prevail over incumbents, public opinion is contingent upon the recent experiences in each country. Once shown the way, and in spite of a long period of stasis (or even state capture), citizens start believing that change is possible. The findings of the latest BiEPAG policy brief authored by BiEPAG’s Members Tena Prelec and Jovana Marovic indicate that, in relation to electoral participation, the ‘collective action’ problem in the Balkans – characterised as lack of confidence in the possibility of change, leading to disillusionment with the democratic process and individual unwillingness to act to bring about change – might not be as difficult to break as previous research had indicated.

In South East Europe, elections are often dismissed as mere window-dressing to democracy, churning the same elites over and over. However, recent votes have challenged that notion. After more than 30 years in power, Milo Đukanović had to concede the victory of the August 2020 parliamentary elections to a wide-ranging coalition of parties that had considerable ideological disagreements, but one aim in common: bringing down the old regime. Yet, Montenegro is not the only place where the status quo is being shaken up.

In November 2020, municipal elections in Bosnia and Herzegovina have returned an unusual outcome: in many cities, citizens have ditched candidates from the three main ethnic parties and embraced political outsiders. A year earlier, Kosovar voters similarly rejected established parties, crowning a former opposition movement (Vetëvendosje) as the relative winner of the election. For one reason or another, the old adage ‘vote for the devil you know’ is not sure to work any longer. Is a change now on the horizon and, if so, can it be long-lasting? How is the public responding to old and new challenges linked to the electoral process? Based on the European Fund for the Balkans’ large-scale survey conducted on a nationally representative sample of citizens in all six countries of the Western Balkans, the discussion that follows will analyse these questions in relation to three main themes: trust in the electoral process to bring about change; attitudes towards the political opposition and their methods; and citizens’ outlook on out-of-country voting. In doing so, this policy brief deals with the homegrown potential of breaking out of the ‘collective action problem’.

The high individual costs of acting to try to bring about change and the low perceived chances of success make it unlikely for citizens of authoritarian or semi-authoritarian countries to express their grievances against the regime. As studies have shown, citizens often choose not to challenge their governments under such circumstances3 . While individuals may be better off cooperating as a group, they fail to do so because the perceived obstacles are so great that they revert to participating in mechanisms that perpetuate old problems and, often, old power structures (such as clientelistic practices or voter abstention). While previous research has looked at the ability of external actors, such as the EU and the US4 , to break the collective action problem and deliver change through elections, citizens’ response has been widely overlooked in this context. The evidence analysed in this brief helps raise questions over the assumptions held so far.

Trust in the electoral process: can elections deliver change?

In 2020, there were some major changes on the region’s political stage, and the most surprising was certainly the one in Montenegro where, after the August parliamentary elections and after more than three decades, the opposition won a chance to form a government for the first time without Milo Đukanović’s Democratic Party of Socialists, DPS, in it. This outcome affected the change in citizens‘perception of elections as a tool for change: 80% of Montenegrins now believe in what was unimaginable just a few months ago:5 that the government could be replaced in elections. This is a significantly higher percentage than in the rest of the region. This same figure stands at 43% in both Bosnia and Herzegovina and in Serbia, and only 38% in Albania. In the middle, there are two countries which have also experienced, in one form or another, a change in the government’s composition as a result of elections over the past half-decade: Kosovo (56%) and North Macedonia (46%). 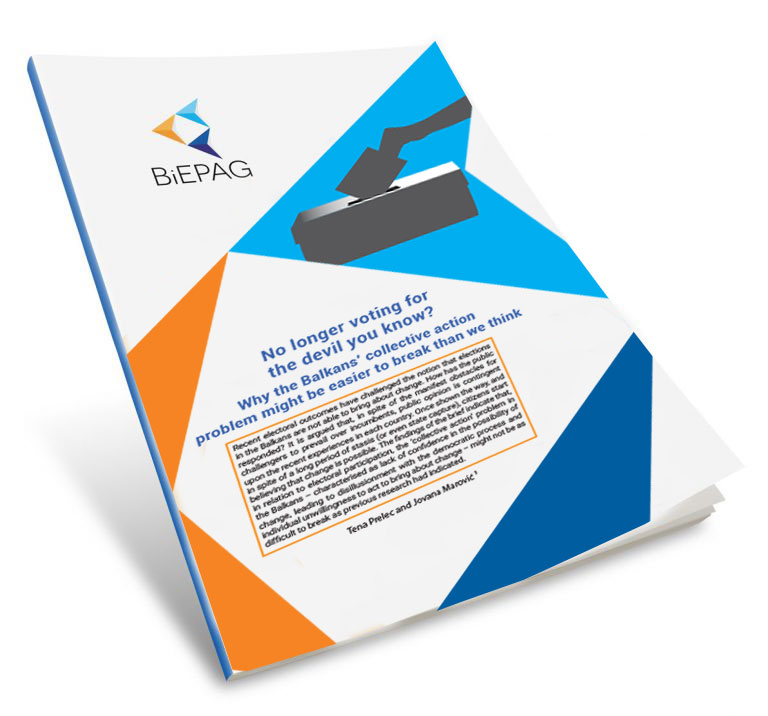