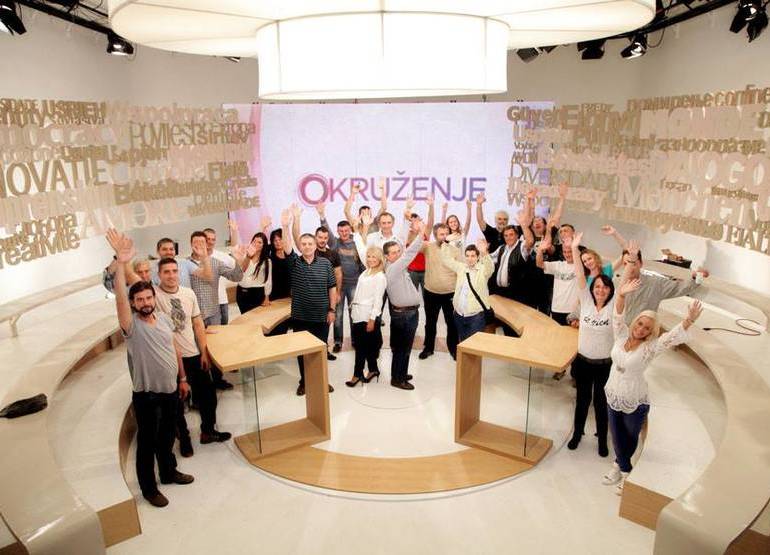 04.10.2016 All News > Regional cooperation
Vicinities, as a unique TV format both in its idea, realisation and scope continues with its regional broadcast. The new 5th season of "Vicinities" has started at the beginning of October with the broadcast of the first episode (Mis)trust among neighbors. Which are the main reasons for the mistrust among the people in the region, is the region still burdened with the prejudices and stereotypes, and can we foresee a future where the different nationalities from the region will be ready for constructive talks and good neighborly relations. These were just some of the questions that were part of the discussion in the first episode of the fifth season of "Vicinities"(OKRUZENJE), which had Svetlana Broz (Author, Bosnia and Herzegovina), Jadran Kapor (Journalist, Croatia), Vladimir Pistalo (Writer, Serbia), Arian Leka (Contemporary Writer, Albania) as guests in the studio. Enver Kazaz (Professor at the Faculty of Philosophy in Sarajevo, Bosnia and Herzegovina) gave the introduction to this interesting topic, and the show also hosted the European Fund for the Balkans Alumni as commentators and active participating audience. In the next period during the autumn programme schedule, the regional audience will have the opportunity to watch the episodes on: "Bilateral Disputes", "Terrorism - “Are We a Target?”", “Shrinking Demographics (Depopulation)”,Over Indebtedness of the Countries and the Citizens”, Tabloid(iot)isation of the Public Life”, "Youth Cooperation in the Region", "Wiretapping", "My Side of History", "The Billionaires around us", and "Women in Business and Politics". The fifth season of “Vicinities” will be presented at the following TV stations with national public broadcasting licences – HRT 4 (Croatia), RTS 2 (Serbia), RTSH (Albania), BHRT (Bosnia and Herzegovina), TVBN (Bosnia and Herzegovina), RTV 3 (Slovenia), TV Vijesti (Montenegro), TV Alsat (Macedonia), RTK 1(Kosovo) and RTK 2 (Kosovo), as well as numerous local stations in Serbia. After the broadcast in Macedonia (Alsat-M, Every Next Sunday at 16.40) and Bosnia and Herzegovina (BHT 1, Every Next Sunday at 14.15), the first episode will be available in Montenegro on Friday, October 7 (and Every Next Friday), at 20:00 on TV Vijesti and in Kosovo on October 11 at 21.00 on RTK2 (and every next Tuesday).
For all the additional broadcasting timetables check the new Vicinities website: www.okruzenje.net Watch the trailer for the first episode:link Watch the video in honor of 5 years of "Vicinities: link
Tags:
Share: