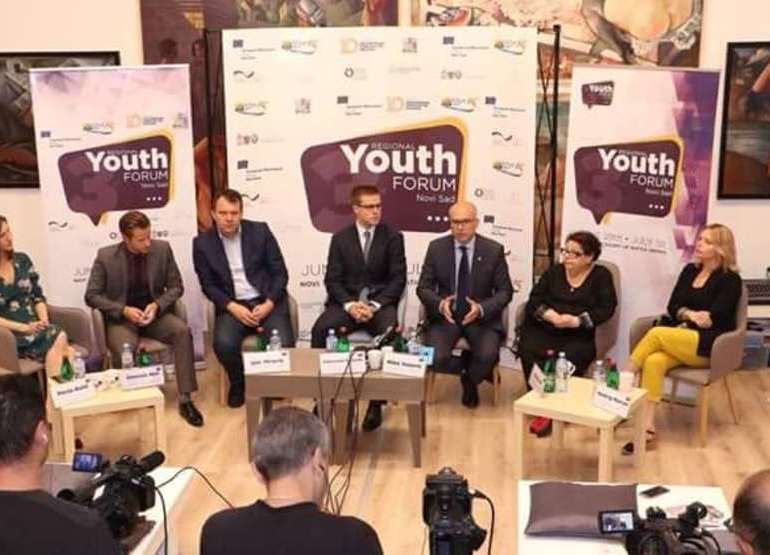 28.06.2018 All News
The Third Regional Youth Forum (RYF) will be held in Novi Sad, Serbia, between June 29th and the July 1, 2018. RYF is organised by the European Movement in Serbia - local branch Novi Sad, the European Fund for the Balkans, the Belgrade Fund for Political Excellence, and in partnership with the Regional Youth Cooperation Office (RYCO) and GiZ – ORF Promotion of EU Integration, under the general sponsorship of the Prime Minister of Serbia Ms. Ana Brnabić. The Forum is also supported by the Foreign and Commonwealth Office of the United Kingdom of Great Britain and Northern Ireland, while additional indispensable support was also provided by the Provincial Government of Vojvodina, the City of Novi Sad and the Regional Cooperation Council. The Forum is officially recognized as the side event to the upcoming 2018 Western Balkans Summit in London. The conclusions of the RYF will be presented at the upcoming "Berlin Process" annual Summit in London, at the 8th edition of the Belgrade Security Forum, and the 2018 Young Bled Security Forum. Since its beginning, The European Fund for the Balkans has been supporting this annual conference which brings together young opinionated leaders, action-oriented and socially active individuals from the WB6 in order to engage in discussions on salient topics and develop solutions based on previous knowledge and active social participation. Over 200 young opinionated leaders, between 18 and 35 years old, with a proven record of making an impact in their communities will be engaged in this year’s Forum panels and workshops. Countless thought-provoking ideas have been debated during the past editions of RYF, however the main objective remained clear: to bring together inspiring, ambitions and bright individuals from diverse fields of work and study, and offer them a collaborative, creative, and inspiring environment for discussions and networking. This year sessions are focused on discussions like “Youth in dialogue - A Better Region Starts with the YOUth”, "Creating visions: potentials and visions of young people in WB6", "Future prospects on: Democratisation, Living conditions, and Reconciliation", "Future prospects on: Democratisation, Living conditions, and Reconciliation", Generations in dialogue - "Reclaiming Democracy - A Quest for a Democratic Polarisation: From the Western Balkans to Europe and back". The finale of the forum will be the presentation of the conclusions from the "Creating visions" and the "Future Prospects" focus groups. Over the years the Forum has gradually, but steadily grown into a meeting place for the young and the bold, ambitious and unrelenting individuals who speak a different language - a language of reconciliation and goodwill. The organizers strongly believe that young people, liberated from the past, should be encouraged to take part in debates and dialogues, and form models of lasting equanimity in the region for the future, through reconciliation, trust and cooperation. By getting to know one another, through mutual connections and exchange of views, they shall ultimately encourage each other to view mutual cooperation as the sole path, which will lead them to the resolution of any past, present and future attitudes and arguments.   Check the Agenda
Tags:
Share: