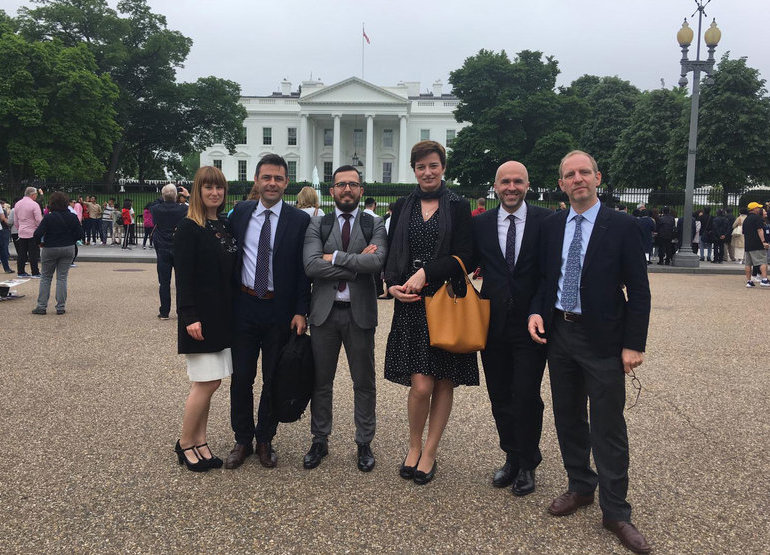 The BiEPAG experts had a series of events and meetings with opinion-makers and officials from the U.S. administration last week in Washington, DC. The goal was to provide an insight into the state of affairs in the Western Balkans and to explore the possibilities of how the U.S. engagement in the region can lead to positive change.   On the first day of the visit, the BiEPAG delegation had a meeting with a group of renowned Washington-based journalists to share their views on the current situation in the Western Balkans. It was an opportunity to emphasize that developments in the region should be more visible to the American public and decision-makers.

The conference “Western Balkans: Managing Challenges Ahead” organized by the Balkans in Europe Policy Advisory Group (BiEPAG), the Johns Hopkins School of Advanced International Studies (SAIS) and the European Fund for the Balkans was the major event on the second day of the visit. The conference gathered 50 experts, journalists, civil society representatives and scholars. The topics such as the successful settlement of the dispute between Macedonia and Greece, Kosovo-Serbia relations, situation in Bosnia and Herzegovina and its future, the state of democracy, the rule of law, the media freedom in the Western Balkans, and the protests in Montenegro and Serbia were part of the in-depth discussion. The participants expressed their hope that the example of North Macedonia has potential to trigger a change in the whole region, but also pointed out that the main problem of the Balkans are the authoritarian governments that are not fully committed towards liberal democratic values of the EU and U.S.

Meetings with the advisors, staffers and officials of the U.S. Senate, the House of Representatives and the Department of State were at the agenda of the third and fourth day of the visit. The main focus of the meetings was the foreign influence in the Western Balkans, relations between Kosovo and Serbia and the future of the dialogue, the EU enlargement process, as well as the state of democracy and the rule of law in the region.

On the basis of established partnerships, the BiEPAG will continue to build strong coalition of people who are devoted to the values of liberal democracy from both sides of the ocean – people who care on the Western Balkans and its more prosperous and brighter future.