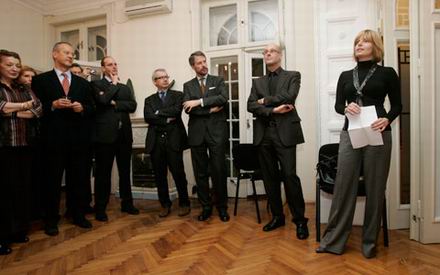 The European Fund for the Balkans’ Secretariat has opened its doors to a wide circle of its guests on January 21 in Belgrade. The reception organised for the Fund’s partners, the Belgrade based diplomatic core, representatives of different organisations and institutions was the first public appearance of the Fund.

He noted that the European Fund for the Balkans is to be perceived as a long-term entry strategy for European donors in the Western Balkans. He added that the venture is indeed designed to engage not only European funders already active in the Balkans, but also public and private donors who until now have not worked in the region or wish to leverage their own funding and increase its impact.

He thanked the four partner foundations for their commitment to this challenging undertaking and concluded: “No doubt that any successful outcome will require a long-term commitment. The delicate political context both at the EU level and in the region in which this Fund is being launched gives us an idea of the challenges that lie ahead for bringing the Balkans closer to the EU. However, I am strongly confident in the capacity of the Fund to provide a contribution to this process.”

Ms. Hedvig Morvai-Horvat, the Executive Director of the Fund expressed her strong belief that citizens of the Western Balkan countries share the same values which the community of European peoples is being built upon and she underlined the main aim of the Fund, which is to help to articulate those feelings in the direction of a common future.

After she shortly introduced the main objectives and priority fields of the Fund, she announced the launch of the first programme and call for proposals for a regional policy programme for think-tanks and policy institutes.

Guests of the reception have been informed about a next major event, the official launch of the European Fund for the Balkans, which will take place in Belgrade in April 2008.