EFB and BiEPAG at the International Conference "From Thessaloniki to Sofia and Beyond" in Rome, June 6, 2018 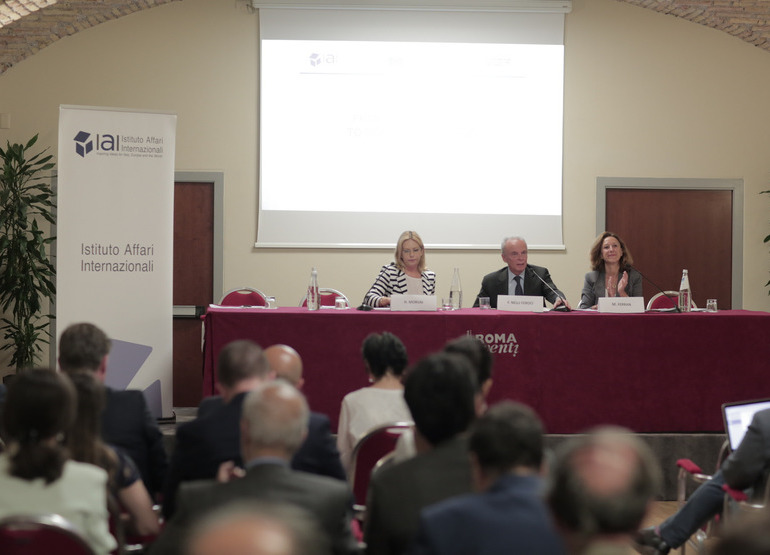 12.06.2018 All News
The International conference “From Thessaloniki to Sofia and beyond” was organized on June 6, 2018 in Rome as a cooperation between the International Affairs Institute (IAI) with the European Commission’s Directorate-General for Neighborhood and Enlargement Negotiations (DG NEAR) and the European Fund for the Balkans. Besides the representatives of the Fund, the BiEPAG, IAI and DG Near, the conference engaged a list of renowned politicians, journalists, businesspersons, civil society actors and academics from the Western Balkans and Europe in a creative forward-looking exercise on the future of European enlargement towards the Western Balkans. The event was aimed at advancing the understanding of the strategic win-win gains that the EU and the WB6 would get by recommitting to reform and cooperation, as much as of the costs of not doing so, which would fuel nationalist, populist and illiberal discourses in both the EU and the Western Balkans. The year 2018 marks the 15th anniversary of the Thessaloniki European Council, which for the first time affirmed explicitly the membership perspective of the Western Balkans. In May 2018, the EU-Western Balkans Summit in Sofia reiterated the unequivocal support for the European perspective of the Western Balkans (WB6) and revamped the EU’s engagement with the region. The new Strategy for 'A Credible Enlargement Perspective for and Enhanced EU Engagement with the Western Balkans', adopted by the Commission in February 2018 set out a path for Serbia, Montenegro, Bosnia-Herzegovina, Kosovo, the Former Yugoslav Republic of Macedonia/FYROM and Albania to eventually accede the Union by 2025. The conference was held to accentuate these recent developments and the potential perspectives through the panels “The Commission’s Strategy for the Western Balkans: moving towards a credible integration”, “National perspectives on the Western Balkans: is there a politicization of the accession process?”, and “Democracy and state fragility in the WB6”. The Executive Director of the Fund, Hedvig Morvai opened the conference together with the President of IAI, Ferdinando Nelli Feroci and Myriam Ferran, Director for Strategy and Turkey, European Commission (DG NEAR). Morvai stressed out that there will be opportunities to explore the new realities in this region and a move from "business as usual" policy is more than needed. The Fund’s director also pointed out that the EU Membership is not a matter of political convince, but a generational political and socioeconomic choice. - We need the new togetherness, to transform the Western Balkans, in areas of rule of law, gender equality and separation of power – said Morvai. On the other hand, Myriam Ferran from DG Near addressed the subject saying that the aim of EU accession is looking to the West, aligning with values and objectives of the European Union. - If we do not have common basic principles, it will bring us nowhere. EU door remains open for the Western Balkans. The door is opened but they will not join the Union in the state they are currently in – highlighted Ms. Ferran. Over the last decade, the multiple crises that have beset the EU have coupled with a reform slowdown in the WB6 to weaken any appetite for further EU enlargement. Negative politicization of enlargement has taken hold, whereby EU Member States, mired in their internal problems, have at best become indifferent to the Western Balkans. As the EU is still struggling with a number of internal and external challenges (ranging from eurozone governance to migration management), some believe that time is not ripe yet for investing massive political capital in the relaunch of the enlargement process. -Our pro-enlargement stance remains the same, but we have to address three key words: fatigue, volatility and widening/deepening debate - stated Armando Barucco from the Italian Ministry of Foreign Affairs and International Cooperation, who was participating in the first panel together with Myriam Ferran, European Commission (DG NEAR), Srdjan Majstorovic, European Policy Centre, Balkans in Europe Policy Advisory Group (BiEPAG) Emanuela Del Re, Member of the Italian Parliament, Professor of Sociology and Steven Blockmans, Centre for European Policy Studies (CEPS). The second panel "National perspectives on the Western Balkans: is there a politicization of the accession process?" was chaired by Eleonora Poli from the IAI and had Michele Giacomelli, Italian Ministry of Foreign Affairs and International Cooperation, Marko Kmezic (University of Graz, Balkans in Europe Policy Advisory Group) and Tobias Flessenkemper (Centre international de formation européenne (CIFE) and Stefan Lehne (Carnagie Europe) as speakers. Marko Kmezic, a member of BiEPAG, concluded that the Western Balkans has a lot of progressive citizens, while the political elites do not generally follow this trend. The third panel was focused on “Democracy and state fragility in the WB6”. Igor Bandovic, Senior Programme Manager from the European Fund for the Balkans hosted the speakers: Ardian Hackaj (Cooperation and Development Institute - CDI), Adnan Cerimagic (European Stability Initiative), Jovana Marovic (Politikon Network) and Arberesha Loxhna (Group for Legal and Political Studies). -Brain drain is a problem, but more importantly, our states are losing its middle class. We have a dominance of market behavior in politics - our politicians are the perfect salesmen. On the other side they are incompetent" - said Ardian Hackaj from CDI Albania. According to Jovana Marovic from Politicon Network Montenegro the countries from the WB have already lost momentum gained from Credible Enlargement Strategy, but the CSO's and citizens do not care about momentum. -We want for EU to teach us democracy, if it is still able. On the other side th ruling elites in the WB do not want to change, because they will lose power – concluded Marovic. Nathali Tocci, Director of IAI, closed the conference pointing out that whatever happens in June, and with the EU Commission communication will have value if the reforms continue in the Western Balkans. You can watch the video from the conference at the following link. Photo Gallery
Tags:
Share: