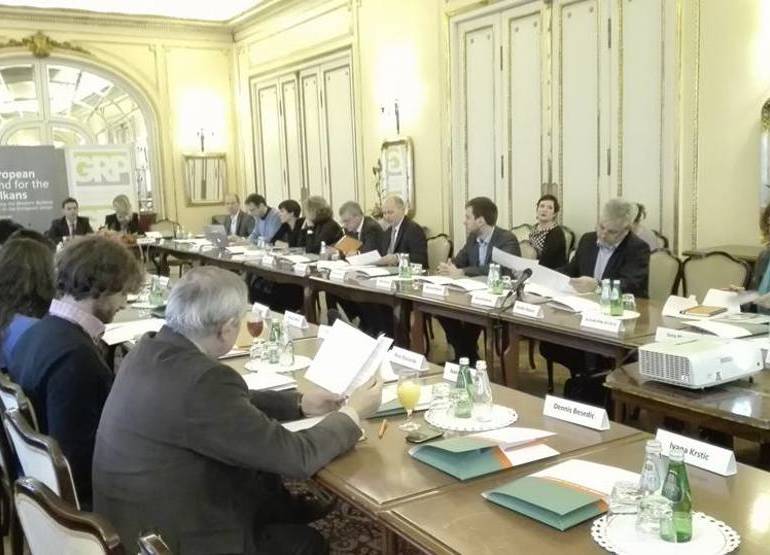 16.12.2016 All News
The European Fund for the Balkans and the Balkans in Europe Policy Advisory Group - a joint initiative of the European Fund for the Balkans and the Centre for Southeast European Studies of the University of Graz in association with the Group for Development Policy organised the conference “EU Enlargement in the Western Balkans in a Time of Uncertainty” related to EU enlargement process and Western Balkans. The event took place on December 16, 2016 in Belgrade, Serbia at Aeroklub (Uzun Mirkova 4) gathering distinguished academics, policy analysts and the representatives of the think tank community in the Balkans. The first panel "How to Reanimate the Democratisation and the European project in the Balkans?" had the speakers Florian Bieber, Coordinator of the Balkans in Europe Policy Advisory Group and director of the Centre for Southeast European Studies, University of Graz, Graz, Austria, André De Munter, Policy Analyst for the Western Balkans and Turkey, Directorate-General for External Policies of the Union, European Parliament, Brussels, Erwan Fouéré, Associate Senior Research Fellow, Centre for European Policy Studies, Brussels Dejan Anastasijević, Journalist, “Vreme” Weekly Magazine, Belgrade was the moderator. The panel “Berlin Process after the Paris Summit” presented the findings of the Think and Link Project on "Implementation of the Commitments of the 2015 Vienna Western Balkans Summit. The representatives of the three partner organisations Jovan Nicic (Group for Development Policy, Serbia), Zoran Nechev (Institute for Democracy ‘Societas Civilis’ Skopje) and Selma Mameledžija (Foundation 'New Policy', Bosnia and Herzegovina) presented the findings of the their study and the latest policy brief with specific recommendations "The Berlin Process and Regional Cooperation: How to make agreements more effective and efficient".
Tags:
Share: