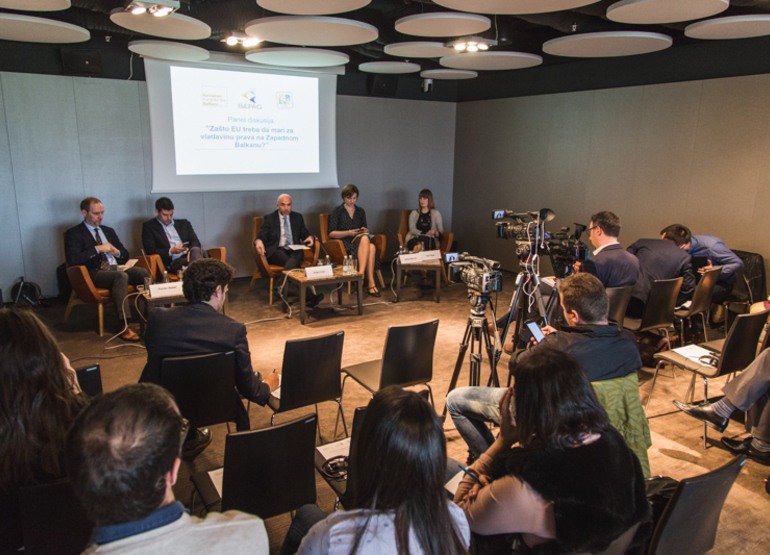 The rule of law is not defined through the adopted laws, but through their implementation and practice, and the current approach of the European Union is not sufficient to help the countries of the Western Balkans in transforming themselves. This is the conclusion of the panel discussion “Why the EU should care for the rule of law in the Western Balkans” and the presentation of the BiEPAG policy study "Strengthening the rule of law in the Western Balkans - Call for a Revolution against Particularism" which was organized in Podgorica on April 8, 2019 by Politikon Network, the European Fund for the Balkans and the Balkans in Europe Policy Advisory Group (BiEPAG).

Executive Director of the Politikon Network, Jovana Marović, says that everything that the Western Balkan countries have achieved was because of the EU’s pressure and the conditioning policy. “It is evident that we have technical progress, and not essential. We have achieved the most in the improvement of legislation. However, when we talk about the quality of legislation, if the law is changed that doesn’t mean that it is better. That doesn’t mean that there is the rule of law and that the law is same for all, and it doesn’t mean that the institution that enforces these laws are independent and impartial”, says Marović. She adds that the countries of the Western Balkans face the problems of high-politicized institutions, constant attacks on the media, and public services that often serve as instruments of ruling parties. “One of the possible transformational EU instruments underlines the possibility that the lack of results and serious violations of the rule of law could be connected with the pre-accession funds as a way to discipline the Western Balkan countries”, concludes Marović. Igor Bandović, Program Manager of the European Fund for the Balkans, says that the rule of law is very important not only for the enlargement, but also for the quality of life of citizens in the Balkans. “We are aware that the rule of law is something we all strive for, both citizens, and political parties, who are declaratively advocating for that. But certainly, without the rule of law, this region cannot have order in a way that will be a success for us and for the countries of the Balkans, their governments and the whole of Europe”, says Bandović.

The rule of law is not just the empty word

Chief Negotiator with EU for Montenegro, Aleksandar Drljević, says that in the forthcoming period, further strengthening of the institutions and building of capacity is needed in order to produce better results. He points out that freedom of the press is recognized as one of the keys and fundamental values that need to be pursued. “Without freedom of speech and without dealing with cases of attack on journalists, we cannot expect progress in the coming period”, concludes Drljević. He points out that, in terms of the rule of law, much work has been done in Montenegro, but there is still more work ahead. Drljević adds that there is always a better way to improve and upgrade the process. “What we have done so far represents a good basis, but in the coming period, institutions should be strengthened through procedures, which are clearly defined to be functional in the true sense of the word”, believes Drljević. Florian Bieber, Professor at the University of Graz and Coordinator of the BiEPAG, points out that citizens of the EU are satisfied with the Union, but they do not support the enlargement. “EU members are not ready to incorporate new members, without the support of their citizens. Therefore, it will not be possible for Montenegro, Serbia, or some other Western Balkan country to join the EU without the support of EU citizens” says Bieber. Bieber also referred to the rule of law, pointing out that it isn’t just empty word, but that it has some content that needs to be implemented. “The rule of law is not defined through the adopted laws, but through the implementation of these laws and through practice. The current EU approach is insufficient to help these societies transform”, says Bieber and adds that if there is not democratic elections who function according to the rule of law, then everything else that comes out of it is problematic.

There are numerous problems related to the electoral process

Tena Prelec, Research Associate at London School of Economics, says that cause for massive emigration from Balkan region is not only economic, but it is also connected in large part for the discomfort of living in a society where all citizens do not have the same and equal conditions. “This lack of equality is very much present in the electoral process, which should be the basis of democracy. The distrust of Western Balkan citizens in the electoral process is astonishing. A recent survey in Bosnia has shown that only 11 percent of citizens believe in the electoral process”, says Prelec. She stated that the main problems in the election process are the exploitation of public resources, the election of election commissions, media darkness, clearing of the electoral register and electoral theft. “The list of electors and the clearing of the electors list is something that is important to ensure equality. Transparency of the employment process is very important, and it is important to ensure justness in the regulations of the members of the election commissions”, added Prelec. According to Marko Kmezić, lecturer and senior associate of the South East European Studies Center at the University of Graz, the freely elected officials, free elections and freedom of expression are the basis of democracy. “These are the three elements that are missing in the Western Balkan countries, and therefore we can come to the conclusion that not only essential, liberal democracy hasn’t been reached, but we also have a problem about the formal side of democracy”, said Kmezić A senior analyst at The Open Society European Policy Institute, Srđan Cvijić, said the public opinion poll in 2004 showed that 60 percent of Germans were opposed to further enlargement. “Now this percentage is 63. Also, in 2004, 52 percent of the French were opposed to further enlargement. Now the number is 61. So, there are differences, especially in France, but it is not brutal to justify such a shift to enlargement policies,” said Cvijić. He thinks that enlargement fatigue is not caused by the mood of electors, but it is caused by the democratic backsliding of some EU member states. “It makes no sense to prevent the opening of negotiations with Albania and North Macedonia, or to invite the leaders of the Western Balkans to the EU summit which will take place following month. The EU must improve its own architecture when it comes to enlargement”, said Cvijić. Text and photo by: PR Centar and European Western Balkans