The Washington D.C. conference “Transformation and Stability in the Western Balkans” 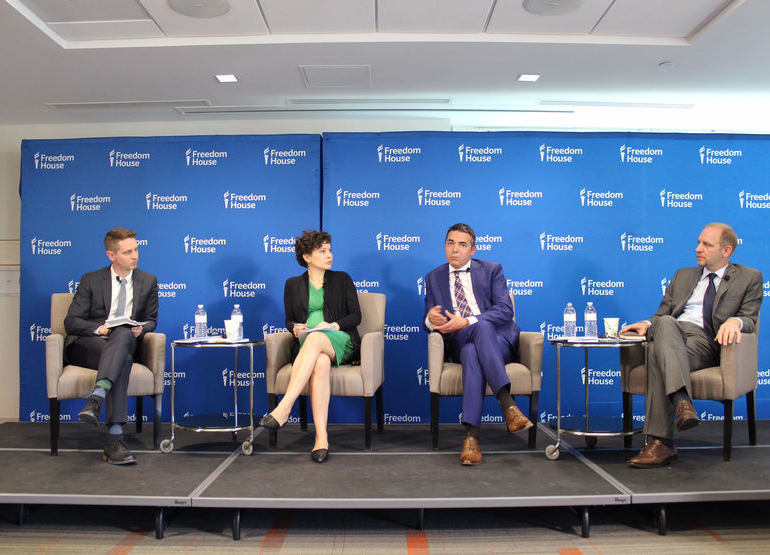 One of the most prominent organizations dedicated to spreading freedom and democracy around the world, Freedom House, in cooperation with the European Fund for the Balkans and the Balkans in Europe Policy Advisory Group (BiEPAG) organized a conference in Washington, D.C. "Transformation and stability in the Western Balkans". What is the state of democracy in the Balkans, what is the role of the EU and the US in the region today, and which foreign factors are influencing the ongoing processes, were some of the issues discussed by Igor Bandovic, Senior Program Manager, European Fund for the Balkans, Florian Bieber, Director of the Centre for Southeast European Studies at the University of Graz, Austria, Ivana Cvetkovic Bajrovic, Associate Director, National Endowment for Democracy and Nikola Dimitrov, Former Ambassador of the Republic of Macedonia to the Netherlands. The discussion was moderated by Nate Schenkkan, Project Director, Nations in Transit, Freedom House. In his opening address, Igor Bandovic stressed that the US should reenergize its role in the region. After an initial analysis of current developments in the Balkans by Nate Schenkkan, Nikola Dimitrov pointed out that there is a game of pretence in the region, because there are states pretending that they are still interested in accession, and political elites pretending that they are conducting reforms. Ivana Cvetkovic Bajrovic said that it is a different situation in the Balkans, compared to the period 10 years ago. She pointed that there are new players affecting the instability in the region, and that the stability policy of the EU and the US is emboldening Balkans' strongmen. Adding to the previous discussion, Florian Bieber concluded that ten years ago there was a clear and coordinated message from the EU and US - reforms, independent institutions and minority rights protection will lead not only to the EU membership, but to a stable liberal democracy. He said that the major change came from the outside, because close monitoring and support for the reform process have dropped off with the EU dealing with other issues, which are more pressing. The conference was attended by around fifty members of the US government, of the diplomatic, academic, and think-tanks. It was a unique opportunity to discuss the current state of affairs in the Balkans and the possible ways of higher engagement of the EU and the U.S. in the future.