The Washington D.C. conference “Balkan Troubles: The European Perspective and the Case for US Engagement” 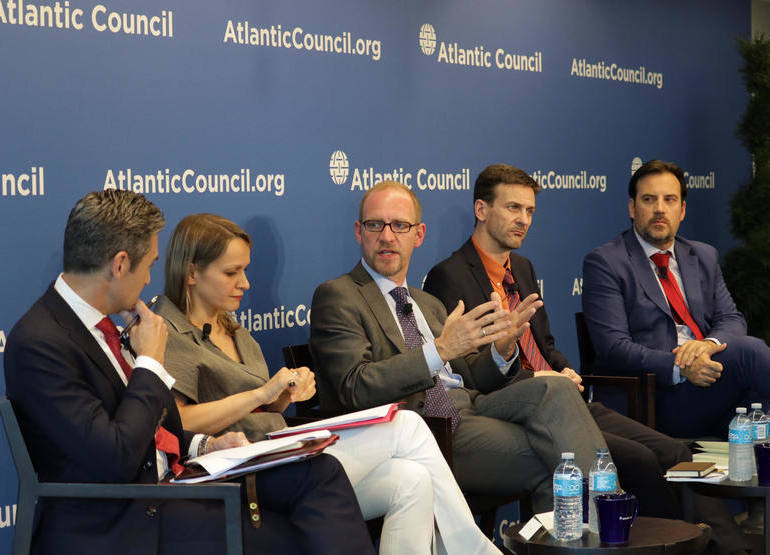 The Atlantic Council in cooperation with the European Fund for the Balkans and the Balkans in Europe Policy Advisory Group (BiEPAG) organised a conference “Balkan Troubles: The European Perspective and the Case for US Engagement” in Washington, D.C. The main topics of the conference were the role of the US in the current geopolitical relations in the Balkans and the state of democracy in the region. The participants of the discussion were Igor Bandovic (Senior Program Manager, European Fund for the Balkans), Dimitar Bechev (Director, European Policy Institute, Non-resident Senior Fellow, Dinu Patriciu Eurasia Centre, Atlantic Council), Florian Bieber (Director, Centre for Southeast European Studies, University of Graz, Coordinator, Balkans in Europe Policy Advisory Group), Milan Nič (Senior Fellow, German Council on Foreign Relations, Non-resident Senior Fellow, Future Europe Initiative, Atlantic Council) and Majda Ruge (Fellow, Foreign Policy Institute at the Johns Hopkins University). Moderator of the discussion was Damon Wilson (Executive Vice President, Programs and Strategy, Atlantic Council). After the opening remarks made by Igor Bandovic, who explained the most important issues the European Fund for the Balkans and the BiEPAG are dealing with, discussion continued with Florian Bieber’s remarks on the situation in the Balkans. He stressed that there is a decline of democracy in the region, that the crisis is increasing and that there is a risk of negative backsliding. Milan Nic said that this is a fragile moment in the fragile regions around Europe. He warned that the Balkans is important, because it can be explosive and trouble might be around the corner. Dimitar Bechev pointed out that investment in the Balkans has paid back, because it is not the region it used to be during the nineties, but that there is a risk that all the investments might be loose. Majda Ruge said that she is optimistic about the investments in the region. She argued that they would be worthwhile, if structures that feed divisions in the region could be removed. This was the second Washington D.C. conference organised by European Fund for the Balkans and BiEPAG in two days. The dialogue with representatives of the U.S. administration, diplomats, think-tanks and other policy– and decision–makers was a unique opportunity to draw the attention to the situation in the Balkans.