EFB and BiEPAG at the EUISS Expert Workshop 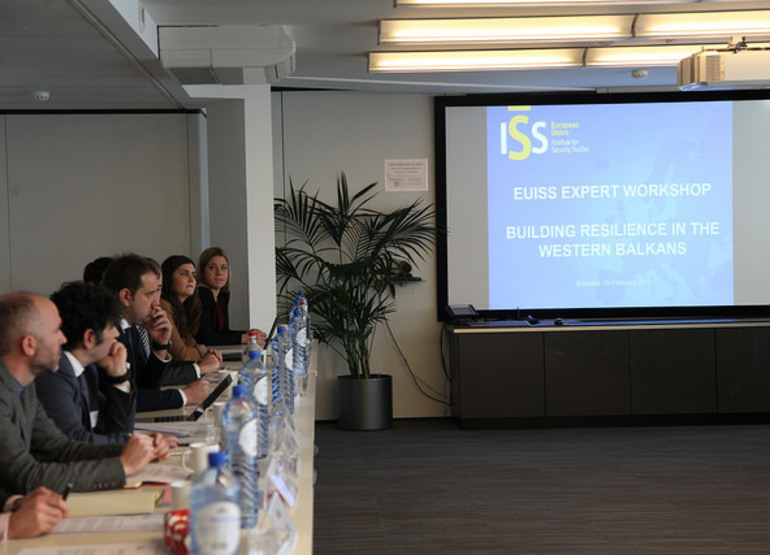 The Senior Programme Manager of the European Fund for the Balkans, Igor Bandovic together with the representatives from the Balkans in Europe Policy Advisory Group took part in the expert workshop “Building resilience in the Western Balkans” organised on 16th of February in Brussels by the EU Institute for Security Studies Brussels. Having in mind the European Union Global Strategy (EUGS) that highlights the strengthening state and societal resilience in the southern and eastern neighbouring regions, including the Western Balkans, the workshop sought to identify and analyse the various drivers of fragility in and for the Western Balkans and the kind of responses that may be needed from the EU and/or local actors. The workshop was aimed at fostering interaction between the academic and think-tank community, on the one hand, and policymakers and practitioners on the other. It brings together leading experts from across Europe, the Western Balkans and Brussels – including from the European External Action Service (EEAS) and the Commission’s Directorate-General for Neighbourhood Policy and Enlargement Negotiations (DG NEAR). The introduction was given by Antonio Missiroli (EUISS Director) and Zoran Nechev (Current EFB Fellow from the EFB Research Fellowship Programme at EUISS in Paris). Sabina Lange (EIPA/EUISS), supported by the impulses given by Dušan Reljić (SWP), Filip Ejdus (UOB), Predrag Petrović (BCSP) and Clive Rumbold (EEAS) introduced the first session “External drivers of fragility”. It was focused on answering the questions - How does increased geopolitical competition contribute to fragility in the Western Balkans? How could the EU react to the threat of radicalisation and violent extremism in the Western Balkans? Is there a shared perception of external threats and their domestic implications – and a shared vision of how to develop the kind of resilience needed for the Western Balkan countries? The second session “Internal drivers of fragility” examined the tendency of some of the Balkan governments that seem willing to silence critical media and to ‘capture’ state institutions. Indeed, public trust in the political system and state institutions is at a historic low. How can these internal challenges be tackled? What is the role of and the potential for civil society actors? Is there a risk that improving ‘state resilience’ comes at the detriment of ‘societal resilience’? And how could the increasing polarisation of societal forces in the Western Balkans be addressed?, were just some of the questions that were tackled in the discussion lead by Florian Trauner, having Florian Bieber (BiEPAG/UNIGRAZ), Milica Delević (EBRD/BiEPAG), Corina Stratulat (EPC/BiEPAG) and Lora Ujkaj (DG NEAR) as impulse givers and discussants. The final session “What kind of resilience – and what implications for the EU?” was chaired by Igor Bandović (EFB), with Srđan Cvijić (OSEPI), Thanos Dokos (ELIAMEP), Ana Juncos (UOB) and Alexander McLachlan (EEAS) as discussants. The fact that EU’s overall strategy in the Western Balkans lies at a crossroads was taken as an initial impulse. Its traditional approach and policy narrative that is increasingly contested by competing external players and domestic political elites which espouse less liberal views, was discussed among the participants. It was said that In implementing the EUGS, the EU may need to revitalise its regional approach while improving resilience in the Western Balkans. Is ‘more of the same’ the most likely outcome? If so, how will this impact on the EU’s objective of building resilience in the region? Is there a common understanding of the concept of resilience between the Western Balkans and the EU? And what could be the role of other regional and external players? were the questions that were closely debated.