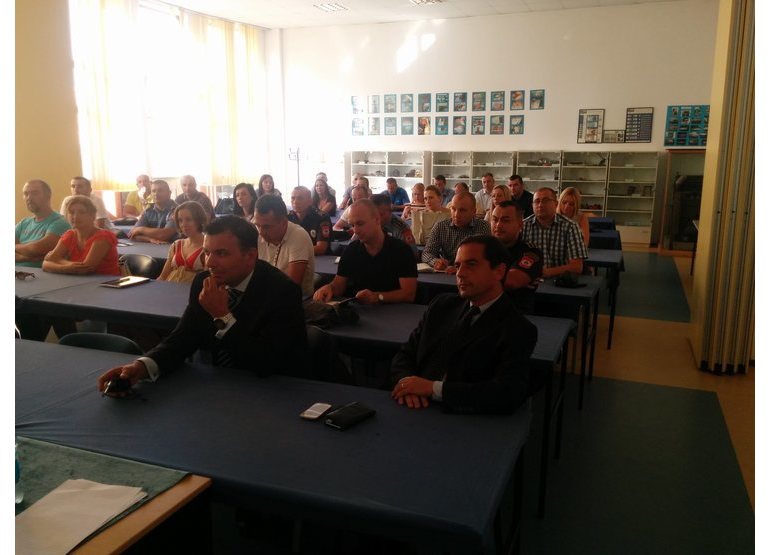 02.10.2015 All News > European integration
The Fellows from the Fellowship Programme for Government Officials Generation 2014/2015 have concluded the final phase of the fellowship programme envisaged as a follow-up presentations of the lessons learned in the host institutions in the EU, back in their home institutions in the Western Balkans. On 17th of September 2015, one of the fellows from Bosnia and Herzegovina, Bruno Brkic (Senior Associate at the Deparment for European Integration, Republic of Srpska Ministry of Interior), delivered the presentation “The organisation and best practice of the Italian Ministry of Interior - with special reference to Department for Public Security", which was a wrap-up of his fellowship programme working plan. On this occasion, the members of the Ministry were introduced with the security structures and the best practices of the police forces of Republic of Italy, with a special accent on the prevention and fight against all forms of crime. The participants were presented with the strategic and operational mode of the police force of the Republic of Italy involving international police cooperation, the fight against drugs smuggling, organized crime, terrorism and the abuse of modern information technologies and the system of police education. In addition, the goal of this presentation was to point out the potential initiatives in the different areas of the police work that can lead to an improvement of the work and mutual cooperation between the Ministry of Internal Affairs and the Serbian Ministry of Internal Affairs of the Republic of Italy, as one of the objectives of the Fellowship Programme for Government Officials. - I have chosen to spent the fellowship practice within the Italian Ministry of the Interior which, in line with Italian Presidency of the Council at that moment and the appointment of the new High Representative of the Union for Foreign Affairs and Security Policy coming from Italy, gave me an opportunity to get familiarised with the Italian security system and its involvement in creating the national and supporting the EU common security policy, as well as certain knowledge and information useful for my home security organisation in confronting current security threats – said Brkic. The presence of the representatives of the Italian Embassy in BiH, who supported the concept of improving the mutual operational and the strategic cooperation, was also of great importance and it confirmed the commitment of the Ministry of Internal Affairs of the Republic of Italy on achieving this common objective. The presentation served as a basis for initiating concrete steps in the future, which could lead to achieving the stated objectives, with a view to strengthening the capacity of the Ministry of Internal Affairs of the Republic of Srpska and its preparation for accession to the system of public security of the European Union.
Tags:
Share: