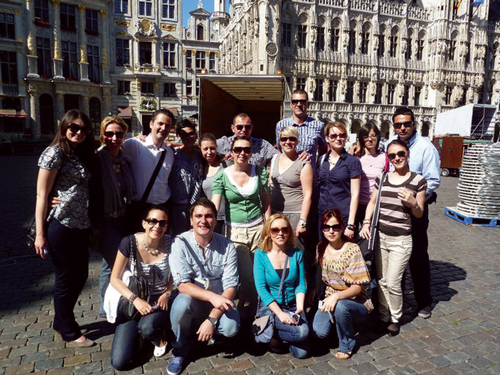 With the Final Seminar held June 30 – July 5 in Mavrovo, Macedonia, the 3rd edition of the Fellowship Programme for Young Government Officials was completed.

The third and final seminar marked the end of a 3-month programme for 17 civil servants coming from throughout the Western Balkans who did their traineeship in Austria, Belgium, Germany, Italy, Portugal and Slovenia.

The Mavrovo gathering offered Fellows an opportunity to participate in a leadership and conflict management training. The one-day workshop Leadership Self Portrait served to collect, share and develop experiences and expectations of leadership on the collective and personal level. The workshop comprised of group/team work, as well as individual reflection and evaluation, short lecture inputs and wrap up.

The half-day workshop Leadership Development - Interpersonal Skills on Leadership Level focused on the development of interpersonal skills required in everyday work situations. The training touched different areas of communication with the focus on conflict management.

Finally, the Fellows also had an opportunity to meet Community members – former Fellows from the previous 2 editions of the Programme and participate in a one-day joint training – Community Conference – Challenges for the Civil Service in the Western Balkans.

Throughout the 3-month period of the overall Programme, the Fellows also took part in the Introductory Seminar held in Berlin and Potsdam, as well as the Intermediary Seminar envisioned as a Brussels study visit.

The third edition of the Programme was launched with the Introductory Seminar held April 8 – 19 in Berlin and Potsdam. The Intro Seminar is knowledge-based, and in addition to being the first opportunity for introductions and team building for the group, aims to cover a variety of political, economic and social topics, with a Western Balkans, European and Global focus.

The first half of the Seminar is held in Berlin, while the second half is held in Potsdam, in cooperation with the Potsdam Centre for Policy and Management.

Each seminar day of the Berlin segment had an overall theme, beginning with a study of the host country of the seminar – Germany and a review of German – Western Balkans topics of common interest. The focus of the session then became regionally wider, touching upon relevant topics for Europe overall, as well as the WB. Finally, the seminar concluded with an overview of global themes of current relevance such as the rise of Asia as an economic power and what that means for Europe, the revolutions of the Middle East and North Africa, as well as the role of the Internet and social networks in this context, in today’s world.

The Potsdam segment offered various tools to ensure training and learning effectiveness. It included classroom learning, as well as group/team work in different settings. The emphasis of the Potsdam seminar was on topical areas of public policy, multi-level governance and leadership in the public sector – summarized under the Perspectives on Good Governance.

Beyond the training focus, the course programme also offered an opportunity to get to know Berlin and Potsdam, socialize and communicate in order to enrich intercultural experience and broaden the learning process.

The Intermediary Seminar held May 29 – June 2 in Brussels was the second opportunity for all Fellows to gather. It is primarily designed as a study visit of all EU Institutions – Council, Commission and Parliament, and, in addition to that, also the NATO. Finally, a number of lectures/panel discussions are incorporated within the Programme. The topics covered overall were:

The Western Balkans and the EU (Council); gender; visa liberalization (Parliament - MEPs: Tanja Fajon, Ulrike Lunacek, Nejra Kalkan – office of Emine Bozkurt); NATO’s current agenda, including the Western Balkans and the new strategic concept (NATO); the enlargement process (Commission); EU presidency priorities: experience of Hungary, action plan of Poland; crisis of legitimacy: political elites and citizens – the WB and the EU. The Intermediary Seminar is also an opportunity to evaluate the first phase of the traineeship of each Fellow.

The new call for the 4th edition of the Fellowship Programme for Young Government Officials will be launched July 20 2011.