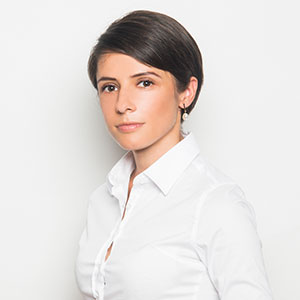 Katarina Tadić has been a Programme Manager with the European Fund for the Balkans since 2020, in charge of coordination and implementation of activities aiming to increase citizen engagement and strengthen local initiatives and movements.

Katarina graduated from the Faculty of Political Sciences, followed by a two-year stint with the Friedrich Ebert Stiftung’s Belgrade office, cooperating with political parties, trade unions and civil society organisations. Then, she worked for three years as a researcher with the European Policy Centre (EPC) in Belgrade, on two different, but complementary areas – public administration reform and gender equality. Working with the EPC, she specialised in topics of inclusion and participation of CSOs in policy making processes.

In parallel, Katarina collaborated with the Kosovo Open Society Foundation on conducting research on the Kosovo state-building process and contemporary policy challenges. She also took part in various initiatives aiming to promote and contribute to reconciliation in the Western Balkans, such as the OSCE Academy for Young Women from Belgrade and Pristina, or the Initiative for RECOM.

Prior to her engagement with the EFB, she worked with WWF Adria in the capacity of Project Officer, on increasing community participation and decision makers’ accountability in protected areas.

Katarina holds two master’s degrees. In 2015 she graduated in Human Rights and Democracy in South East Europe, holding a double degree from the University of Sarajevo and University of Bologna, respectively.

In 2018, Katarina received a prestigious Chevening Scholarship from the UK Government thanks to which she graduated from the University of Bristol following studies in Policy Research.

She is a native speaker of Serbo-Croatian and fluent in English.